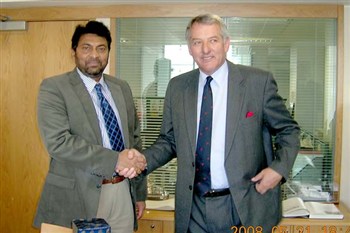 The valuable work being undertaken by a Working Group under CINCEASTLANT/COMNAVNORTH’s leadership will greatly influence Force Planning for future Maritime Forces.
CINCEASTLANT / COMNAVNORTH will act as the Maritime Component Commander (MCC) for Commander-in-Chief Allied Forces Northern Europe (CINCNORTH) in the Article 5 and support Commander Strike Fleet Atlantic (COMSTRIKFLTLANT) in the PSO.

The Commander-in-Chief Eastern Atlantic (CINCEASTLANT) is a British four-star admiral.
CINCEASTLANT is "dual-hatted", serving both as a regional commander within the Allied Command Europe (ACE) structure in his capacity as CINCEASTLANT, and as a component commander under CINCNORTH in his capacity as Commander, Allied Naval Forces North (COMNAVNORTH). Operating within the chain of command of both NATO Strategic Commanders enables the headquarters to be a focus for military movements and seamless maritime operations involving both Strategic Commands.

CINCEASTLANT is also responsible for the administration and operation of the Standing Naval Force Atlantic (STANAVFORLANT), on behalf of the Supreme Allied Commander, Atlantic.

Best thing in Sea Eagle Londonderry was the transport link back to Belfast and the ferry home. But the Officer i/c Dawson was o/k