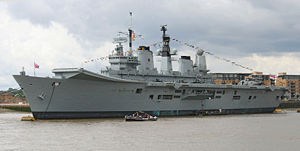 The Ark was my first draft and I joined it at Devonport whilst she was undergoing a minor refit, following return from the Far East. My part of ship was the after electrical workshop, under EA1 "Buck" Taylor and Ch El Danny Legg. My first job was Conversion Machinery, then Boats and Batteries. I then did a stint as PO's Messman before moving to the Internal Broadcast section with ElMech Mick Weaver. Other people in the after electrical workshop were LEM's Jan Luger and Buck Ryan.
My first mess was 3J3, then I moved to the forward bunk space (below the NAFFI shop), and I ended up in 3DO mess - half greenies and half seamen on communal duties. Enjoyed three great years on the Ark with a great bunch of mates. During this time EM's became either CEM's or OEM's, I was the latter. I left it in 1967, to return to Collingwood for my LOEM's course.

DO ANY OF THE ELECT/BRNCH REMEMBER THE BOILER ROOM FIRE IN 65? WE WHERE SUPPOSED TO DO AN EXERCISE WITH THE YANKS AND THEN HEAD FOR AUS. FOR THREE WEEKS.UNLUCKLY FOR US THE ARK DECIDED NOT TO DO THE TRIP. I CAN REMEMBER FIGHTING THE FIRE AND THEN HAVING TO PULL MOST OF THE AXIAL FLOWS OUT FOR REPAIR.ANDY ANDERSON,GINGE RUDDAL,BOB ROGERS ARE JUST A FEW NAMES I CAN REMEMBER WORKING FLAT OUT AT THAT TIME. WE STILL GOT TO AUS. BUT ONLY FOR SEVEN DAYS IN FREEMANTLE. BUT WHAT A TIME WAS HAD BY ALL . JACKY REA.

Getting into the Ark Royal's Squash 1st Team as a lower decker. Mainly through the help and encouragement of the Navy No 1 player Lt Robin Bawtree an officer and a true gentleman.

Never forget the night of B boiler room fire,we were up on the flightdeck watching a movie on the side of the island and we got lumbered to spray hoses onto the island to keep it cool.

HMS Arkroyal Mombasa I was the coxswain of the 36ft cutter (the canopy had been removed) and was detailed to pick up guest for the welcome cocktail party ,most of the guest were ladies.As I brought the boat alongside and put the boat in reverse nothing happend and the boat carried on and went right under the after heads outlets giving all the ladies a good soaking . Captain Gibson was not amused .