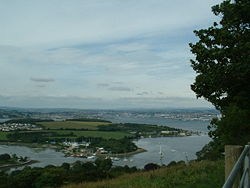 It is one of three UK operating bases for the Royal Navy (the others being HMNB Clyde and HMNB Portsmouth). HMNB Devonport is located in Devonport, in the west of the city of Plymouth in Devon, England. It is the largest naval base in Western Europe and is the sole nuclear repair and refuelling facility for the Royal Navy. The collocated Royal Dockyard is owned and operated by Babcock Marine (BM) who took over the previous owner Devonport Management Limited (DML) in 2007. The BM operation is commonly called Devonport Dockyard.

The Royal Navy Dockyard consists of 14 dry docks (Docks Numbered 1 to 15, but there is no 13 Dock) , four miles (6km) of waterfront, 25 tidal berths, five basins and an area of 650 acres (2.6 km?). It is the base for seven of the Trafalgar class nuclear powered hunter killer submarines and the main refitting base for all Royal Navy nuclear submarines. Work was completed by Carillion in 2002 to build a refitting dock to support the Vanguard class Trident missile nuclear ballistic missile submarines.

Locals and tourists have long been able to visit the Dockyard during "Navy Days," a three day event where visitors can tour the facility, go aboard active naval ships and watch various displays of naval prowess. Among the most popular attractions is the nuclear powered submarine HMS Courageous, used in the Falklands War.

Devonport serves as headquarters for Flag Officer Sea Training, which is responsible for the training of all the ships of the Navy and Royal Fleet Auxiliary, along with many from foreign naval services

MANY OF US SERVED IN FALKLANDS AND ANTARTIC , ON PATROL LONG BEFORE MANY PPL KNEW THEY EXISTED. THERE WERE 3 FRIGATES VERYAN BAY-BURGHEAD BAY-AND BIGBURY BAY. SERVING ON THAT STATION WITH HMS SUPERB AS OUR FLEET COMMAND. HAD NO POWERS THAT BE HAD NOT CANCELLED THAT SERVICE NO ONE WOULD HAVE A LIFE IN FALKLANDS YEARS LATER.AS WE WERE CHASING ARGIES OUT OF PLACES DISCEPTION ISLANDS ETC THEN. SHAME THAT ANYONE HAD TO LOSE A SON OR ANYONE CLOSE DUE TO GOVERNMENTS.