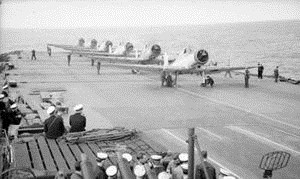 The squadron was first equipped with nine Hawker Nimrods and three Hawker Ospreys and served aboard HMS Courageous in the Home Fleet. In 1935-1936, the carrier and squadron operated in the Mediterranean. The squadron re-equipped with the Blackburn Skua in October 1938 and took these aboard HMS Ark Royal.

In 1939, 800 Squadron was flying primarily Blackburn B-24 Skuas and a few Blackburn Rocs from HMS Ark Royal. The Squadron was transferred to Admiralty control on 24 May 1939.

During the German invasion of Norway in 1940, whilst based at Royal Navy Air Station Hatston, Kirkwall, Orkney 800 and 803 squadrons dive-bombed the German cruiser Konigsberg at Bergen. The squadron aircraft shot down six He 111 bombers. In the attack on the Konigsberg, 800 Squadron provided five aircraft and seven crews. The 800 Squadron Commanding Officer, Capt RT Partridge, RM was taken POW and four aircraft lost on an attack on the Scharnhorst on 13 June. In July 1940, the squadron was involved in the attack on the French Fleet at Oran. Two SM 79 bombers were shot down off Sardinia.

The squadron was regrouped with Fairey Fulmars in Gibraltar during April 1941, proceeding with two Flights to HMS Victorious to search for the Bismarck, and to HMS Argus. On regrouping later that year, the squadron joined HMS Furious for an attack on Petsamo, and after the West Indies onboard HMS Indomitable was involved in the Madagascar operations.

Hawker Sea Hurricanes were received in 1942 and took part in the North African landings off HMS Biter in November 1942. In July 1943, the Squadron was the first FAA squadron to be equipped with the Grumman Hellcat. The squadron, operating from HMS Emperor provided escort for Fairey Barracudas in the April 1944 attacks from against the Tirpitz in Alta Fjord, Norway

During the Korean war, the Squadron and its Seafire F.47s were on board HMS Triumph however, and their first operation was a strike by 12 Seafires and 9 Fairey Firefliess on Haeju airfield on 3 July 1950. Because of their short range, the Seafires were frequently given the Combat Air Patrol task over the fleet. During the Inchon landings in September, 1950 Seafires flew armed reconnaissance missions and spotted for the bombarding cruisers. But, by the end of the month, No 800 had only three serviceable aircraft and no replacements were available in the Far East. The inevitable crop of landing accidents and cumulative airframe stress damage meant the end of the Seafire’s operational life. During the Korean war the squadron flew 245 offensive patrols and 115 ground attack sorties before HMS Triumph was replaced by HMS Theseus with its Sea Furies and Fairey Fireflies.


No. 800 Sqn. Attackers on HMS Eagle in 1952/53In August 1951 the Supermarine Attacker enters service with the Squadron at Ford, West Sussex, later embarking on HMS Eagle. It was the first jet fighter to be standardised in the Fleet Air Arms first-line squadrons and later the squadron flew Hawker Siddeley Buccaneers before being disbanded in 1972

Falklands War, 1982 : Equipped with Harriers, including those transferred from No.899 HQ Training Squadron, 12 were scraped together for HMS Hermes. Two of the 800s planes were lost, one when it exploded on take off from HMS Hermes and one shot down during an attack on Goose Green. No Harriers were lost in air-to-air fighting and the squadron destroyed 13 enemy aircraft. Lieutenant-Commander Gordon Batt DSC was killed in action flying a Sea Harrier FRS 1 from HMS Hermes on 23 May 1982.

April 2004, while based in Yeovil the squadron was disbanded. It was re-commissioned on 31 March 2006 under Commander Adrian Orchard RN, when 800 NAS became the first RN squadron within Joint Force Harrier as part of Number 1 Group within RAF Strike Command. From March 2007, parts of the squadron (with 801 NAS) have also been used to form the Naval Strike Wing.