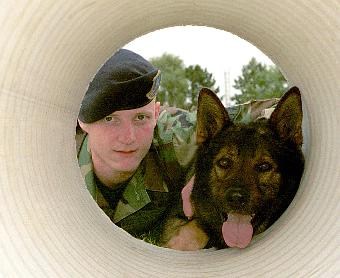 RAF units throughout the country were using locally obtained dogs to guard airfields during the early part of the War, but in 1942, at the height of World War II, Lieutenant Colonel Baldwin formed the Ministry of Aircraft Production Guard Dog School (MAPGDS) at Woodfold near Gloucester, turning out professionally trained RAF dog handlers which in turn released hundreds of men for war duties who had previously been employed as guards. In 1944 the MAPGDS was absorbed by the RAF Police and re-titled as the RAF Police Dog Training School.

The RAF began training dogs to detect illicit drugs in 1970 and later trained dogs to detect firearms and explosives. Impressed with the training standards and quality of the dogs, HM Customs & Excise began using RAF drug detection dogs to good effect. In late 1975 dog training moved to Newton; Mr Fricker retired and was succeeded by Mr Terry McHaffie. RAF Police dogs were called upon to search Shell’s off-shore oil rigs in 1979 for the presence of terrorist bombs. RAF Police dogs were used to guard various prisons at the end of 1980 when prison officers went on strike and during 1982, a member of the public donated the 10,000th dog to the RAF Police. Two dog trainers were sent to Thailand in 1984 to train Air Force dogs to search for firearms and explosives.

Following the end of the Gulf War in 1991, RAF Police dogs were used to guard large numbers of Iraqi prisoners-of-war in Kuwait. Later, the rules changed which allowed females to join the RAF as dog handlers.

I am informing all RAF Police Dog Handlers who remembers Cpl David Alan Simpson AKA "SIMO". Who sadly died this year of a heart attack at the age of 50. He was a gift dog collector at RAF Newton until 1986. Then 2nd IC RAF Wyton until 1988, Sgt Brian Carrick was the IC. Then he was IC dog section 280su RAF Troodos until 1991. His last posting was RAF Wittering. Thoughts go to his family.