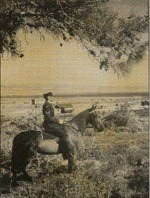 The history of RAF Akrotiri began on 1 July 1 1955 when the first 30 personnel posted to the ’Unit’ established themselves in the flat, dry, rocky scrubland on the windswept Akrotiri Peninsula. Nicosia Airport was temporarily closed as a result of terrorist activity and the handling of the island’s civil aviation was diverted to Akrotiri - with a tented ’civil airport reception centre to match. An RAF Regiment Light Anti-Aircraft Wing was also brought in. By the end of August 1956 Station strength had reached 260 officers and 2864 other ranks: a massive increase in 12 months. It brought with it 1430 personnel on the daily sick-parade, mainly a result of the over crowding and unsanitary conditions, as construction lagged behind the unforeseen demand for accommodation. From its rough beginnings with caravans and mud tracks, the Station was laid out, roads made, hangars and some permanent buildings constructed. Three new barrack blocks were opened allowing another 32 families onto the Station into formerly misappropriated married quarters.

Other intended married quarters were still in use as billets, Station Sick Quarters, the Education Centre, the Hospital and the NAAFI. A bank had opened for business and 4 wooden shacks served as shops.


A small theatre club was in existence and out along Ladies’ Mile, the Sailing Club had been formed. In its first 12 months as a functioning operational airfield, RAF Akrotiri had not only survived but had expanded and flourished. Although continuously affected by the EOKA troubles in one way or another and with more than a quarter of the year spent on a full war footing for the Suez Crisis,  morale was high and the pioneer spirit was still strong.

Not much has changed operationally at RAF Akrotiri in recent years, but the only operational flying squadron which is permanently based at Akrotiri today is No 84 Squadron. No 34 Squadron RAF Regiment continued to serve on-island until 1996 when they moved back to the UK. Their place was taken by personnel from the resident Army infantry battalion (RIB). In 1986 one event dominated - on Sunday, 3 August , RAF Akrotiri suffered an attack by mortar and automatic fire. The Station responded by raising its security awareness to the high levels which are still obvious today. The Operations Centres (Ground and Air) maintain a constant watch in conjunction with the SBA Police - just in case. In 1988 a new command structure in Cyprus resulted in the closure of Air Headquarters and Headquarters Land Forces Cyprus, both based at Episkopi and instead the formation of a Joint Headquarters - British Forces Cyprus. Shortly afterwards, in 1989 Joint Units were also formed at Akrotiri, replacing single service Units such as 17 Ordnance Battalion (RAOC), 58 Squadron (RCT), 48 Cyprus.

I served in the radio/radar section of 103 Maintenance Unit, RAF Akrotiri from 1958 to 1960.
I loved my sports and played cricket and football for the Section, Squadron, Wing teams and cricket for the Station 1st & 2nd teams.
Anyone out there served with me - Sid Webb, Wally Millington or anyone else who as on 103 at the same time.

I served as atation Voluntary Band Instructor and had a very happy and satifying time there the band was excelent and up to such a standard that we the silver band combined with the pipe band and did a beat the rereat ceromony at the football pitch and entertained an audience of 4000 .the eproceeds of the show were donated to local charities and RAFBT the group captain remarked on the bands performance to the effect that it was as good as any he had seen including professional bands.

Does anyone out there remember the super 'bars' that all the airmen did each Christmas?
Every billet was turned into a themed bar,I remember one ,you entered thro' a dark passage but you were walking on thick springy horsehair covered with canvas, you felt drunk before you'd had a drink.
They were really good times,the bars made Christmas away from home really good fun.

As an SAC storebasher enjoying the privileges of the spacious,new aircooled Scaf while working as a member of the Priorities Cell team, I recall those happy days, and often wish I had made better attempts to exchange contact gen with colleagues and pals of that time.
Forgetting rank, and sometimes a first name or surname, I'd like to mention colleagues and buddies whose memories I still recall with affection..... Johnny Colgate, Mick Myskow, Dougie Waites, Mick Brown, Paul Meyers, Robbie Robertson, Bill Robertson, Keith Sill, Paddy Lynch., and in other Sections of RAF Akrotiri, Nigel Ferguson (he may have been 1153MCU), John Carter, Henry Connolly, as well as the lady at Minns, Mrs Erica Bochwald & Leo.
We (an honest bunch of storebashers at 103MU) knew from paperwork received that a 13ft rescue dinghy was about to be scrapped. We (the honest bunch of storebashers) thought it would be nice to have a nice boat for messing about in. Somehow, the scrapped boat found itself outside our bungalow barrack-block, and during the winter months that followed, a small group of devoted enthusiasts beavered away to completely rebuild and re-furbish the boat in time for the Summer. The boat, now legally registered as the civilian vessel "Aquaphoenix" and sporting a recently (and legally) acquired Evinrude outboard motor, was set to provide the rewards of our industry.
We (the honest bunch of storebashers) did a deal with Akrotiri Yatch Club, who desperately needed a small boat to set out their daily marker-buoys. The Yatch Club used our boat up to noon daily, and then filled her with the necessary fuel for us to enjoy the rest of the day. (Thank you, Twiggy's Dad!) Recycling and reuse of scrapped items can be fun.... just as our acquisition of the wooden areo-engine crates allowed us (yes, you know who...) to convert these into beach huts/homes for the Supply Squadron needy during their recreational time. Ladies Mile? Great Memories!

Watching the Army recover HMS Striker, our Glass fibre hulled coastal patrol boat on a floating platform after the two ringer Rupert let the local Cyprian translator drive it over a submerged rock pinnacle. Punctured the hull, salt water in both donks, blade snapped off the prop, drive shaft bent to buggary.