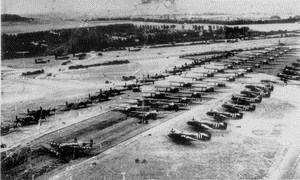 From 1958 until 1965, Tarrant Rushton was used by the RAF’s Strike Command as an emergency dispersal point for its nuclear deterrent. The fleet of massive Vickers Valiant and Victor V-bombers - predecessor of the Victor and the Vulcan - carried nuclear warheads against the Soviet threat during the height of the Cold War. During 1958, civil engineering contractors Costains reinforced the main runway and built a loop at the north end of runway 01/19 so that the bombers could back-track down the runway after landing instead of using the unstrengthened perimeter track. A few times a year, the RAF would stage exercises with a couple of the giant Vickers Valiants being dispersed to Tarrant Rushton awaiting the "scramble" alarm. Crews and groundcrews from 148 Squadron at Marham deployed during early May, 1961 as part of ‘Exercise May Flight Four’. The Valiant hardstandings are still in place, together with one ground support equipment hut.

Once home to 3,000 people, Tarrant Rushton Airfield in Dorset played a vital role during the Second World War. Development of the airfield on a plateau to the east of the River Tarrant started in May 1942. Tarrant Rushton had a somewhat chequered career but undoubtedly its greatest moment came when the serried ranks of Halifax tugs and Hamilcar gliders started to move off down the runway carrying elements of the 6th Airborne Division to Normandy. Home to the Royal Air Force and the Glider Pilot Regiment – with its massive Hamilcar and Horsa gliders – Tarrant Rushton landed the first troops in Normandy on D-day, and played an important part in the Arnhem and Rhine Crossing operations.

In September 1946 the airfield was put on ’Care & Maintenance’ and then declared ’surplus to requirements’ in December 1947.It lay abandoned until Flight Refuelling Ltd arrived in June 1948. They modified four of the dispersed ’T2’ hangers together with many of the wartime buildings on the north-east side of the airfield. Staff at Tarrant Rushton carried out a wide range of internationally important aviation research projects - from the ill-fated TSR2 jet project through to the Harrier jump jet and even the supersonic Concorde - until the airfield’s closure in 1980 and its swift demolition that winter.