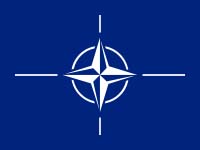 The North Atlantic Treaty Organisation (NATO) was signed on the 4th April 1949. It is based in Brussels, Belgium. The treaty enforces the idea of collective defence. This means that all members of the organisation agree to mutual defence if there is an attack by an external party.

For the first few years, NATO was merely a political association.  However, the Korean War between 1950 and 1953 caused two US commanders to build up an intergrated military structure.

During the Cold War, doubt was spread over the credibility of NATO defence to a potential Soviet Invasion. The relationship between the European and the United States was also tested. This caused the French to produce their own nuclear deterrant and withdraw from NATO’s military structure in 1966.

NATO became closer to the Balkan states after the fall of the Berlin Wall in 1989. After the September 11th attacks in 2001, NATO has deployed troops to Afghanistan and trainers to Iraq.

In 2002, the Berlin Plus agreement was signed. This was an agreement between the European Union (EU) and NATO, which stated that the EU could use NATO assets if it chose to act independently. However, this was only if NATO chose not to act itself in a situation.

NATO members are responsible fro around 70% of the world’s defence spending, with the United States alone accounting for half the cost.