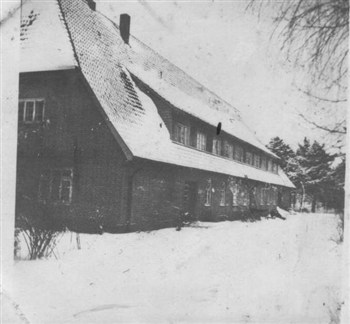 The RAF disestablished the station and was closed down in January 1957, formally handed over from the 23 LAA RAF Regiment to the German Air Force.

Fassberg was returned to the Bundeswehr, and is now the "Fa?berg Army Air Base", and home to the German Army Aviators Corps "Army Aviators Light Transport Helicopter Regiment 10".

As well as flying Squadrons the base consisted of No1 Wing RAF Regiment this was made up from 22 LAA Squadron, 23 LAA Squadron and 57 LAA Squadron. 22 & 23 Squadron were ground to air firing with Bofors, and training practice was done at Todendorf not far from Keil.

A PHOTO OF THE CLERKS OF HQ RAF FASSBERG ON EXERCISE TO REPEL THE RUSSIANS MARCH 15, 1951 UNDER THE COMMAND OF SGT, FINNIS! I AM BOTTOM RIGHT. LEFT OF THE PICTURE IS DANNY FROM BIRMINGHAM. NEXT TO HIM JOHN BROWN, EDINBURGH; ?;EWAN MCPHERSON, GLASGOW; CPL. LUCAS; PADDY ACCOUNTS; I DON’T REMEMBER THE REST. BUT THEY WERE ALL GREAT PALS.