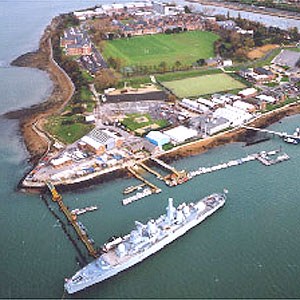 Commander-in-Chief Fleet (CINCFLEET) is the admiral responsible for the operation, resourcing and training of the ships, submarines and aircraft, and personnel, of the British Royal Navy. CINC is subordinate to the First Sea Lord, the professional head of the Naval Service.

In 1971, with the withdrawal from of British forces from East of Suez, the Far East and Western fleets of the Royal Navy were unified under a single Commander-in-Chief Fleet, initially based in HMS Warrior, a land base in Northwood, Middlesex. This continued the trend of shore-basing the home naval command that had started in 1960, when the Home Fleet command was transferred ashore. The majority of the staff have now transferred to a new facility in HMS Excellent.

In 2006 the staffs of CINCFLEET and Commander-in-Chief Naval Home Command (CINCNAVHOME) merged, with the majority of CINCNAVHOME’s staff joining the CINCFLEET staff in Excellent.