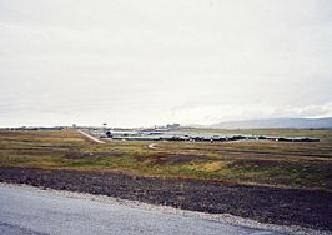 RAF Mount Pleasant is the most recent purpose-built airfield in the Royal Air Force. The RAF previously had a small base at Stanley airfield after the end of the hostilities in 1982. During the Falklands War when the islands were occupied by Argentine military forces, British aircraft were sent to disable the runway with RAF Strike Command Vulcan bombers (Operation Black Buck) and Royal Navy Sea Harriers. The raids were moderately successful, and on the first Black Buck mission one 1,000 lb bomb hit the runway in the middle, disabling it. However, temporary repairs by the Argentines did allow Hercules C130 transport aircraft to bring in supplies and take out casualties until the end of the conflict. After the end of hostilities the runway was fully repaired by British military engineers.

After the surrender of the Argentine ground forces on the islands, the British still faced the problem of potential Argentine air attacks from the Argentine homeland, so an aircraft carrier had to remain on station to guard the islands with its squadron of Sea Harriers until the local airfield was prepared for jet aircraft. HMS Hermes was the first to take guard duty, whilst HMS Invincible went north to change (at sea) a gearbox that had broken while departing the mainland UK. The Argentines claimed the aircraft carrier was hit on May 30, and needed repairs. Invincible then returned to relieve Hermes which urgently needed to return to the UK for boiler cleaning. Invincible returned until she was relieved by the newly built HMS Illustrious, which was quickly rushed south and commissioned during the journey. Once the Port Stanley runway was available for jets, Illustrious was relieved by several RAF Phantom FGR.2.

The British government felt that Stanley airfield was not the best option for a large, permanent base and decided to construct a new RAF station and make it the centrepiece of the Islands’ considerably strengthened defences. This was intended to deter any future Argentine attempts to take the islands by force. Mount Pleasant, to the west of Stanley, was chosen as the site for the new station. The airfield was opened by Prince Andrew in 1985 (Prince Andrew served in the Falklands War), and became fully operational in 1986.

RAF Mount Pleasant has a wide range of social and sporting facilities including a gym, swimming pool, golf course, diving centre, karting, laserquest, library, cinema, bowling, climbing wall and indoor and outdoor sports pitches. There are two NAAFI shops, hairdressers, a medical centre, and a education centre on the base. There is also a complex that includes a cafe and a small shop (RONOKEs), which are both owned and run by the Falkland Islands Company.

Currently based at Mount Pleasant are No. 1435 Flight with 4 Tornado F3s, No. 1312 Flight, with a single VC-10 tanker and one Hercules C130, as well as No. No.1564 Flight (since November 2007) with 2 Sea King helicopters maintained by SKIOS (Sea King Integrated Operational Support), an aeronautical engineering confrontation between Augusta Westland and VT Aerospace. There are also 2 Sikorsky S61 civilian Helicopters run by British International Helicopters Limited (Brintel). Ground units include No 7, 303, and 751 Signals Units and a Rapier detachment from the Royal Artillery. This was previously handled by the RAF Regiment but the RA now have sole responsibility for operating the Rapier.

33 Engineer Regiment (EOD) provides constant support and is part of the Joint Service Falkland Islands Detachment which consists of RAF and RLC EOD teams. It is mainly based in Stanley but there is also a detachment at Mount Pleasant. The group’s role is to destroy unexploded munitions from the Falklands War; to brief troops, tourists and citizens on which areas are safe; and to mark uncleared minefields.

There is also a Joint Communications Unit (JCU) providing the electronic warfare and command and control systems for the Royal Navy, Army and Air Force.