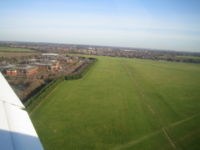 White Waltham Airfield (ICAO: EGLM), is located at White Waltham, near Maidenhead in Berkshire, UK. The airfield is privately owned and is the home of the West London Aero Club, the largest flying club in the UK. About 150 or so light aircraft are based at the airport, which with three runways is reportedly the largest grass airfield in civilian use in Europe. The airfield has a CAA Public Use Aerodrome Licence (Number P773) that allows flights for the public transport of passengers or for flying instruction.

The airfield was set up in 1928 when the de Havilland family bought 196 acres of grassland to house the de Havilland Flying School. In 1938 the airfield was taken over by the government, and during the second world war was the home base of the Air Transport Auxiliary. The airfield was also home to Fairey Aviation. Prince Philip, Duke of Edinburgh was taught to fly at White Waltham in 1952, flying a De Havilland Chipmunk belonging to HQ Home Command Communications Squadron of the Royal Air Force. The airfield stayed in RAF hands until 1982, when it was purchased by the current owners. Until recently (2007), it was the base of Thames Valley air ambulance helicopter.

On June 24th 1989, White Waltham Airfield was the venue for one of the largest Acid House raves at the time. Called the Sunrise Midsummer Party, it was organised by Tony Colston-Hayter and David Roberts. The event was attended by over 11000 ravers, and about 1000 vehicles were brought to the airfield. This caused 3 mile tailbacks on the approach road up to the ’Fairey’ hangar (built by (Fairey Aviation) on the North side of the airfield where the rave was held. ’The Sun’ newspaper ran a headline ’Ecstasy Airport’ the next day

I remember many incidents and people from my time as a snowdrop at W.W.My best mates were Reg Jackson (whome Im still in touch with to this day and Johnny Brand. Both were real characters and so funny with it.One night Johnny climbed on the Guardroom roof and pushed straw down the chimney..that forced the smoke from the coal burner into the Guardroom and everybody was seen running into the night ,tears streaming gasping for air.That was the kind of thing that only Johnny would think of how he survived his two years ill never know.I have tried to find him with no success as yet.
One night I was locking up the Flying H.Q and when I came to this particular door I just froze with fear and trepidation.I just could not move any closer to that door,it was suddenly so cold the only time that the hairs on the back of my neck literally stood up. I very quickly locked the rest of the HQ and returned in record time to the Guardroom a cup of tea and a much needed fag. The next day Sgt Raw told me thaT room held four plastic bags containing the clothing ect of airmen who had been killed in a flying accident over our airfield the day before.So THAT was it?The same day the M.O.D.Took them away and I never experienced that again.

The saddest day of my service was when my good mate Terry Hook was killed in a motorcycle accident . Terry was doing a swap shift for me while I was playing rugby in Jersey in Dec 1961. That Saturday evening there was a bad storm and a tree fell across the road killing Terry.The first I knew of it was reading the front page of the Daily Express in the Jersey Airport,there was also a photo of him. Imagine how I felt seeing that. I have never really got over it and never will.Terry was only about 18 or so and loved the RAF POLICE.It must have felt like that in wartime when so many fine young men were just snubbed out in their prime of life.Why did that tree fall just at that second Terry was driving to the Station to do my shift? Sods Law. I cant explain how sick I feel to this day.