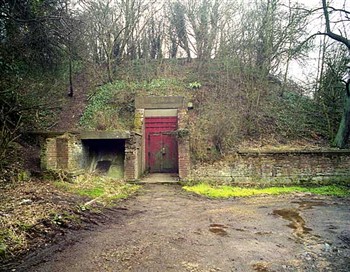 RAF Watnall is not an airfield; it was home to the control and administration centre for Fighter Command’s 12 Group covering the Midlands, Norfolk, Lincolnshire and North Wales. As well as numerous surface buildings including the domestic site, the hub of RAF Watnall consisted of 3 ’bunkers’, the control centre, the filter block and the communications centre. The filter block was a collecting point for information, duplicate and irrelevant information being filtered out here before passing on to the control centre. The layout of these bunkers is similar to Fighter Command’s Group HQ’s at Preston (`Langley Lane’ or `Goosnargh’), Inverness and Newcastle (Kenton/Blakelaw). At Watnall the control centre is completely underground and now flooded while the filter block was built in a railway cutting and covered over. The construction of the communications centre is unclear.

Although construction started in 1938, the control centre was not completed by the outbreak of war and it wasn’t until late 1940 that 12 Group’s new headquarters became fully operational having moved in from nearby Hucknall. The second operations block, the filter block was not finished until 1943.

RAF Watnall was sited on both sides of the B600; the timber barrack blocks were on the west side of the road. A block of four airmen’s barrack huts, nearest Watnall Hall, was of temporary brick construction. A group of six buildings, a large timber building, used as a unit stores, four Laing Hutting buildings and an ablution of temporary brick construction were erected in the grounds of Watnall Hall. The junior officers’ quarters was also Laing Hutting in the grounds of Watnall Hall, but to the north of the main site. On the east side was the Officers’ Mess, HQ offices and the underground Operations Block, which was some 60 ft below ground. From this underground base there was a direct link into the main defence telephone and teleprinter network with direct lines to all operational HQs. In 1941 work started on a second Operations Block, just to the south of the main site, in a railway cutting close to Watnall Wharf railway siding. This was the Filter Block, which housed top secret equipment. It became operational in 1943 and through the Filter Block passed all information received from all the Radar and Ground Control Interception Stations. Included on this second site was an Air Traffic Control building, Guard Room and two Ejector Chamber buildings, all of permanent brick construction.

After the war, No 12 Group HQ moved to RAF Newton in December 1946 and the operations Block closed. The Filter Block, of solid concrete construction, remained in use. In early 1950 the buildings were updated by 5002 Airfield Construction Squadron and the site was used during the ROTOR programme throughout the 1950s.

RAF Watnall closed in 1961. The Filter Block was left in a ’State of Readiness’, the two metal entrance doors being welded shut. But, it was not long before thieves broke in via the ventilation duct and removed the brass and copper nuts and cables. Over the years of neglect many fires were started and various classified documents were either burned or removed. In the building, open for all to see, was a telephone directory (then current), listing all the secret sites in the UK and even the wartime Q sites. It was a security shambles. In the early 1980’s the Filter Block was taken over by the Kimberly Rifle Club and by the mid 1980s it’s Guard Room and the Air Traffic Control building had been demolished. By 1990 most of the site to the west of the main road has become housing and no RAF buildings remain, only the bases of the Laing hutting, which are in woodland. The east side containing the Operations Block is now an HGV Testing Centre and to the south lies Watnall Weather Centre on what was once the Nissen hut site of the Royal Observer Corps offices. The wartime Officers’ Mess, later the Sergeants Mess, and the area to the north has been acquired by a haulage firm, and this area has now been landscaped. The area close to the road that once housed the Stand-by-Set House No 3 and the Transformer Kiosk No 3 for the Filter Block now houses a garage and a small industrial estate