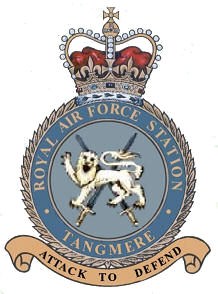 RAF Tangmere first became a reality after a forced landing by a Royal Flying Corps pilot in 1916 during the first world war.

Following his report on the suitability of the site, the War Office began construction in 1917, but the aerodrome had only just been completed by the Armistice in November 1918.

Between the two wars, Tangmere became one of the RAF’s finest aerodromes and a much sought-after posting. Nos 1 and 43 (Fighter) Squadrons were based there from the mid-1920s and often appeared as the star attraction at the annual Hendon air pageants.

Tangmere was to remain a fighter station throughout its life with Gloster Gamecocks, Armstrong-Whitworth Siskins and Hawker Fury bi-plane fighters based there between the wars.

However, following the growing threat from Nazi Germany, the RAF began expanding and the Hawker Hurricane, the first of the new generation of eight machine gun-armed fighters, arrived.

Following the outbreak of war, Tangmere was used as a stepping-off point for the squadrons moving to France in support of the British Expeditionary Force.

After the fall of France and the Dunkirk evacuation, RAF Tangmere braced itself for the forthcoming battle, to be known later as the Battle of Britain.

Tangmere’s location meant it was on the front line throughout the battle and the German Air Force, the Luftwaffe, recognising this, made a major attack on the airfield at lunchtime on August 16, 1940.

The 20-minute raid destroyed or badly damaged many of the airfield buildings, but the station remained operational throughout the day and for the remainder of the battle.

Douglas Bader, the legless fighter ace, arrived at Tangmere in March 1941 as Wing Commander (Flying) to lead the three Spitfire squadrons of the Tangmere Wing.

Fighter Command had turned from defence to taking the fight to the enemy, with its fighters operating over northern France. Bader was downed on August 9, 1941 over St Omer, northern France and remained a prisoner-of-war for the remainder of the war.

During 1942, Tangmere and its satellite airfields Westhampnett (now Goodwood airfield) and Merston supported the Dieppe Raid and No 1 Squadron, equipped with the Hawker Hurricane, returned to carry out night intruder missions.

That summer, one of its pilots, Karel Kuttelwascher, a Czech, shot down 15 enemy aircraft on these dangerous lone missions.

During 1943 Squadron Leader Hugh Verity led with distinction the pick-up pilots of No 161 Squadron.

This squadron, equipped with the short take-off and landing Lysander aircraft, transported Special Operations Executive (SOE) agents at night to and from Tangmere during the full moon periods to small farm fields in France.

By the summer of 1944, four temporary airfields, known as Advanced Landing Grounds, had been built close to Chichester at Funtington, Apuldram, Selsey and Bognor to support the D-Day landings.

The air activities to support the landings were controlled from the Tangmere Operations Room at Bishop Otter College, now part of Chichester University.

Post war, Tangmere made the headlines in 1946 when the RAF’s High Speed Flight commanding officer, Group Captain EM ‘Teddy’ Donaldson, attained the world airspeed record in a Gloster Meteor jet fighter, flying from the airfield over a course off Rustington, reaching an average speed of 615.78mph.

Neville’s attempt was successful, reaching an average speed of 727.63mph.

His aircraft, with Donaldson’s Meteor, are displayed in the museum, courtesy of the RAF Museum. Neville Duke was president of the museum for 24 years until his death in 2007.

In June 1958, Fighter Command left Tangmere, but the airfield remained operational until October 1970, when this famous RAF station finally closed.