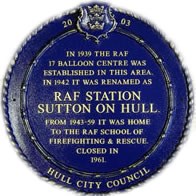 In 1939 the Royal Air Force establised No 17 Balloon Centre at Sutton on Hull. It was renaimed RAF Sutton on Hull in 1942. Between 1943 and 1959 it was home to the RAF School of Firefighting and Rescue. The station closed in 1961.

Originally designated as RAF 17 Balloon Centre it was opened on Wednesday 28th June 1939 and was from where, during World War 2, the Balloon Barrage in the defence of Kingston upon Hull and the Humber Area was controlled and maintained. By September 1942 over 2,000 Royal Air Force and Women’s Auxiliary Air Force personnel served at and from the Centre which, on the 15th October 1942, was renamed RAF Station Sutton-on-Hull. It became the home of the RAF School of Fire Fighting and Rescue from1943-59.

The RAF Station was finally disposed of on Monday 14th August 1961. Covering 83 acres, the land was developed for housing and facilities, including the library and the North Point Shopping Centre.