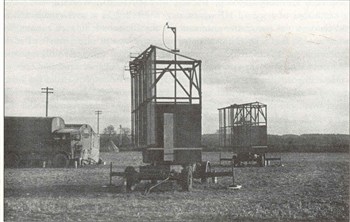 Royal Air Force Sopley during the last war (1939-45 -Ed) was an active Ground Controlled Intercept (GCI) station, under the operational control of Fighter Command in the defence of Great Britain. In 1959 the role of the unit was changed to include the School of Fighter Control plus a Special Tasks Cabin, to look after both the military and civil research and development requirements and also to afford control facilities for fighter interception practice for Royal Air Force Chivenor.

With the advent of more and much faster aircraft - both military and civil - combined with the growth and complexity of the airways network over the United Kingdom, it was decided by the Royal Air Force, in the interests of air safety, to explore the possibility of using radar to afford positive control of military aircraft crossing airways. Trials were carried out successfully and, in October 1959, the Air Traffic Control Area Radar system was introduced at Sopley.

The School of Fighter Control was later disbanded and the station (including the Special Tasks Cabin) then became part of the United Kingdom Air Traffic Services organisation, which is known today as Military Air Traffic Operations (now [2002] part of Royal Air Force Strike Command). Initially the existing Air Traffic Operations Room at Sopley was equipped with only four radar consoles, but over the years its capability has been increased by the addition of more consoles and height finders, in an attempt to meet the ever growing requirement.

In October 1960 and additional unit, known as the Joint Air Traffic Control Area Radar School , was established at the station, and this continues to function today.

Travelled to working site at RAF Sopley , from domestic site at RAF Ibsley , & within a few minutes we were all hurried away to a field nearby to guard one of the first of the `V BOMBERS` ( A Valiant ) which had crashed . I was armed with a broken piece of tree branch. What exactly happened I still have no idea .Rumour was that they cut their engine (s) and could not restart. Another was that in restarting the engine (s) exploded.
When stationed at RAF Wartling , I & others were sent to BRADWELL on SEA, ESSEX, which was badly affected by flooding. We spent weeks filling sandbags with mud to try to hold back sea. We were surprised by two Meteors flying low and `Buzzing `us. Of course no sound preceded them so I, and quite a few others , ended up on our `butts ` in the mud . No means of cleaning ourselves until back at camp a week later. Whilst there we slept on the floor of church hall with one blanket each.