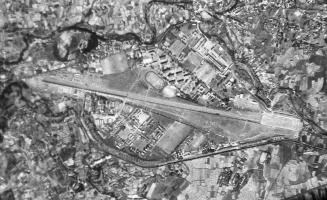 The Shek Kong Airfield (Chinese: 石崗機場), ICAO:VHSK), or formerly Sek Kong Airfield, is the airbase of People’s Liberation Army Air Force in the Hong Kong Special Administrative Region of the People’s Republic of China (PRC). It is located in Shek Kong, near Pat Heung and Kam Tin.

Before the sovereignty of Hong Kong was transferred to the PRC in 1997, the airbase was used by the British Forces Overseas Hong Kong, and was then known as RAF Sek Kong. Construction of the airbase started in 1938, and was completed in 1950. The delay was due to Japanese occupation during the World War II. It was the first airport in Hong Kong with a paved runway. The general public can use the airport to learn to fly and operate private aeroplanes during weekends.

From the mid 1980s to 1992, RAF Sek Kong was a Vietnamese Refugee Detention Centre

Not long moved from Kai Tak where i helped run the "Eng. Club" bar. When i was asked by Squd Ldr Rae Garden to set up a welcome for "Jimmy Edwards" & "Eric Sykes". We would have kept the club running if it had’nt been for some dozy pillock of a key-orderly forgetting to secure S. H. Q. Needless the "Eng. Club" never opened again during that Groupies reign. Shame really, always had a good time.

Setting up an Its a Knockout competion on the grass in front of the flats, ignoring warnings to cover my shoulders (thick cloud - I thought I knew better) and listening to the other guys in the band having a great time playing and singing in the evening while I lay in bed with severe sunburn.

Giving the FS Discip (don’t remember the name) a lift to work only to be told to get a haircut as he got out of the car.