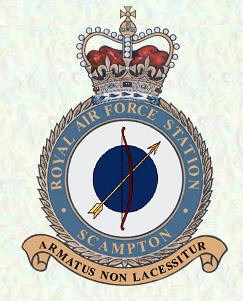 Royal Air Force Scampton is an operational Royal Air Force station located adjacent to the A15 road, near to the village of Scampton, Lincolnshire and six miles (9.7 kiliometres) north west of county town Lincoln in England.

RAF Scampton stands on the site of a First World War Royal Flying Corps landing field, originally called Brattleby. The station has remained in operation almost uninterrupted ever since and has provided a base for fighters in the First World War, bombers during the Second World War and V-force Avro Vulcans during the Cold War.

At the outbreak of the Second World War, Scampton transferred to No. 5 Group RAF in Bomber Command and 49 Sqn and 83 Sqn moved in, re-equipping with Handley Page Hampdens for the hazardous task of low level minelaying (code named 'Gardening') and the bombing of ships. By 1942, the squadrons had changed to the Avro Lancaster, but were then replaced at Scampton by 57 Sqn and 617 Sqn.

617 was specifically established for the Dambusters mission codenamed 'Operation Chastise' in which Wing Commander Guy Gibson led the attack on the dams in the Ruhr Valley, for which he was awarded the Victoria Cross. The grave of his dog, run over and killed the day before Operation Chastise, can still be seen at Scampton.