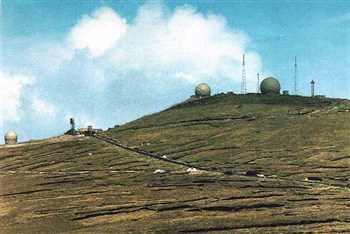 In February 1940 instructions were issued by the Director of Signals Development at the Admiralty for construction to began on Admiralty Experimental Station (AES) No. 4 on the island of Unst in the Shetland Islands.
The site selected was on top of Saxa Vord, at 950 feet the highest point on the island. Due to delays caused by the weather and RAF requirements for equipment, the station did not become operational until September 1940. Saxa Vord (the Navy appear to have referred to it as a single word, the RAF as two) was equipped with CDU (Coast Defence U-Boat) radar, the Naval version of CHL, and was tasked with tracking submarines and shipping attempting to break out into the Atlantic. It was also able to plot aircraft and was to play a major part in the destruction of several German aircraft in the area. Saxa Vord closed down in July 1945, having been manned by the RN throughout its operational life.

In 1956 construction of a new radar station, on the same site as that which had been used by the Navy, was begun by the RAF.
RAF Saxa Vord now acts as a reporting post for the The United Kingdom Air Surveillance and Control System. UKASACS is comprised of a number of individual static and mobile units which provide the minute-to-minute information on air activity required to defend the UK and our NATO partners. Manned by officers of the Fighter Control specialization of the Operations Support Branch with the support of airmen Aerospace Systems Operators, the UKASACS is a highly sophisticated computer-based system which gathers and disseminates information on all aircraft flying in and around the UK Air Defence Region - this is known as the Recognized Air Picture (RAP).