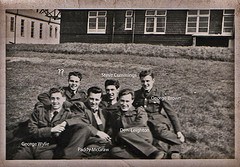 Pitreavie Castle is a defended house in the style of a fortified keep in Scotland. Built in around 1615 between Rosyth and Dunfermline in Fife, it remained in private hands until 1938, when it was acquired by the Air Ministry. RAF Pitreavie Castle closed in 1996.

The Pitreavie estate was owned by Lady Christina Bruce, sister of Robert the Bruce, in the 14th century. By the early 17th century, it was owned by the Kello (or Kellock) family. Henry Wardlaw of Balmule (later Sir Henry Wardlaw, 1st Baronet of Pitreavie and Balmule) bought the estate in 1608 for "10,000 merks Scottish". Wardlaw was Chamberlain to Queen Anne, wife of James VI of Scotland. Wardlaw’s granddaughter, Elizabeth Wardlaw, was the reputed author of the poem Hardyknute and the ballad Sir Patrick Spens. When James acceeded to the English throne in 1603 and travelled south to London, he left Dunfermline Palace in Wardlaw’s care.

Wardlaw began to construct the castle in 1615. It was originally built to a U-shaped plan, with a rectangular main body about 20 metres long, two wings projecting to north, and spiral staircases rising up both interior angles. The roof originally had crow steps on the gables and dormer windows, with the only entrance on the inner side of the west wing: a matching door in the east wing led down to a blind cellar. There were no windows on the ground floor. The grounds were planted as a "wilderness" in the late 17th century, with acres of ash, birch and elm trees. Henry Wardlaw became a Baronet of Nova Scotia in 1631, and died in 1637, succeeded by his eldest son, also Henry.

The Battle of Pitreavie was fought nearby on 20 July 1651, between an English force commanded by Colonel Robert Overton and a Scottish force, mainly composed of highlanders from the Clan MacLean. The house was sold to Archibald Primrose, 1st Earl of Rosebery, in 1703, and then to Sir Robert Blackwood, Lord Dean of Guild (and later Lord Provost) of Edinburgh, in 1711. It remained in the Blackwood family for 170 years, but was unoccupied for almost a century.

The castle was bought by Henry Beveridge, a wealthy mill owner, in 1884, when it was extended and modernised. He inserted window on the ground floow, and added a portico to the north, leading to a new main entrance. The grounds were also renovated, adding a water garden and a narrow-gauge railway.

Beveridge died in 1922, and the castle was sold to the Air Ministry in 1938 for ?12,306, who added a concrete outbuilding housing kitchens, a bar and a dining room, a bunker, and other outbuildings. The castle was used to coordinate operations of the Royal Navy and Royal Air Force Coastal Command. Other buildings added when the castle was the home of RAF Pitreavie Castle have been demolished.

After the Second World War, Pitreavie Castle became the headquarters of the NATO North Atlantic Area, home of the commanders of air forces and of naval forces in the North Atlantic, and the home of the Air Officer Scotland and Northern Ireland (AOSNI). The base closed in 1996, and role as a maritime rescue co-ordination centre was moved to RAF Leuchars. The castle has now been converted into several apartments with most of the surviving gardens developed as private housing (MacLean Gate) and the Carnegie Campus business park.