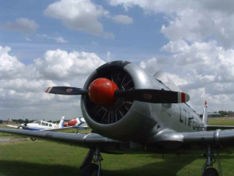 North Weald fighter base was founded in the summer of 1916 during the First World War by the Royal Flying Corps. Its military functions continued to develop during the interwar period, with the building of large hangars and accommodation for Royal Air Force (RAF) personnel. The airfield played an important part in the air defence strategy of the United Kingdom during the Second World War. Initially Hawker Hurricanes were deployed at the airfield, alongside Bristol Blenheim night fighters. The Hurricanes from North Weald saw action over the beaches of Dunkirk and played a key role in the Battle of Britain. In 1940, two American Eagle Squadrons moved into North Weald supplied with Spitfires. A couple of years later, Norwegian squadrons were re-assigned to the airfield. Various jet fighter squadrons were based at North Weald from 1949 and the sight of Gloster Meteors and De Havilland Vampire fighters in the west Essex skies was commonplace.

The last front line combat unit, No. 111 Squadron RAF flying Hawker Hunters, the famous Black Arrows of 22 loop formation fame, left North Weald in 1958. And, in 1964, the RAF withdrew from the airfield completely. The airfield latterly spent time in both British Army and Royal Navy hands for a short time until in 1979 North Weald became surplus to the Ministry of Defence (MoD) operational requirements and was sold to Epping Forest District Council, who still own the airfield to this day.