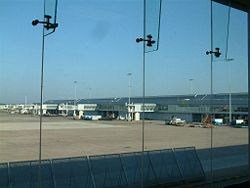 The airport began as a Royal Air Force base during the Second World War, RAF Negombo. In 1957, when SWRD Bandaranaike removed all the British Military Bases from Sri Lanka (Ceylon), the base was handed over to the Royal Ceylon Air Force (RCyAF) and renamed Katunayake. Part of it still remains an Air Force base.

In 1964 Anil Moonesinghe, the Minister of Communications, commenced the building of a new international airport to replace Ratmalana, with Canadian aid. The new airport was completed in 1967, and Air Ceylon, the National Carrier, commenced international operations from it using a Hawker Siddeley Trident and a leased BOAC BAC VC-10. The airport was also a Trans World Airlines (TWA) hub for a short time.

In recent years, various expansion projects have been undertaken at Bandaranaike International Airport. A pier with eight aero-bridges opened in November 2005, the first of its kind in Sri Lanka.

On May 7, 2007 the Sri Lankan Government decided to shift some major military aviation out of the space adjoining the airport to Hingurakgoda, paving the way to more civilian operations.

The group photograph is of the ’B’ Watch crew occupying billet number 231 at RAF Negombo circa 1954. Would appreciate hearing from any "survivors"