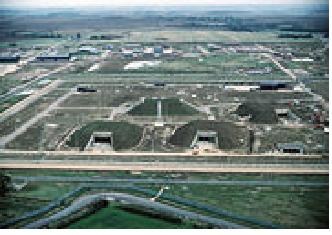 At the start of World War II the Air Ministry selected the area as the site for what would become RAF Molesworth. The base was built in 1940 and 1941. The first unit, Royal Australian Air Force 460 Squadron was formed at the base on November 15, 1941 with Vickers Wellington IVs. 460 Squadron departed the field on January 4, 1942. RAF Bomber Command 159 squadron moved in shortly afterwards, however this unit did not remain long, moving to the Middle East on January 12.

Molesworth was one of the early Eighth Air Force stations assigned to the United States Army Air Force (USAAF). In February 1942, General Ira Eaker and four US staff members inspected Molesworth for possible American use, and during 1942 the facility had all its runways extended to American specifications for heavy 4-engined bombers, with the main being 2,000 yards long and increasing the number of hardstands to fifty. It was given USAAF designation as Station 107.

From 16 September 1943 – 18 June 1945, Molesworth served as headquarters for the 41st Combat Bombardment Wing of the 1st Bomb Division.

On July 1, 1945 the Americans turned the station back to the RAF, who quickly chose it to be a training base for their new jet aircraft. The first jet unit, 1335 Conversion Unit, arrived on July 27, flying Gloster Meteor IIIs. It would be joined over the next year by several transient aircraft detachments and units.

On October 10, 1946, 1335 Conversion Unit moved from RAF Molesworth. The base was then inactivated and placed in a ’care and maintenance’ status.

As the Cold War increased in intensity, the US Air Force began looking to expand in Western Europe. RAF Molesworth was chosen in 1951 to become home to the 582d Air Resupply Group. The station was enlarged with main runway extensions and modern facilities. After much runway work by the 801st Engineer Battalion, the group moved from Great Falls, Montana to the base in February 1954.

On October 25, 1956 the 582d was redesignated the 42d Troop Carrier Squadron. The 42d flew HU-16s, C-47s, C-119s and C-54 Douglas Skymaster cargo transport aircraft from Molesworth until May 3, 1957 when it moved 13 miles up the road to RAF Alconbury. However the squadron had a short life at Alconbury and was deactivated on December 8, 1957. The C-54s and C-47s were sent to Rhein-Main Air Base West Germany, and the C-119s were sent to the 322nd Air Division at Evreux-Fauville Air Base France.

With the departure of the 42d Troop Carrier Squadron, Molesworth was put into a standby status, with the occasional aircraft using the base. In April 1959, with the closing of the active runway at RAF Burtonwood, WB-50Ds of the 53d Weather Reconnaissance Squadron used the runway at Molesworth, although the unit was officially assigned to RAF Alconbury. The squadron was reassigned to RAF Mildenhall in August. Base personnel was reduced to a small maintenance staff and for the next twenty years the facility was in reserve status with upkeep provided by Alconbury.

In 1973 the airfield was officially inactivated. The only remaining structures on the station were a small arms firing range, used by USAF personnel for target practice, a compound for surplus and obsolete USAF vehicles manned by civilian USAF employees, a derelict watchtower on the western perimeter of the base, and a warehouse. The base was unfenced and openly accessible to all. Local farmers grazed sheep on wired-off sections where the runway had formerly been, a solitary pest controller known locally as John the Rabbit-Catcher lived in a caravan just outside the former site of the north-west gate, and local people practised for their driving tests on the remaining concrete road surfaces.

Molesworth did serve as an American education and housing centre, offering military family housing for personnel assigned to RAF Alconbury, along with an elementary and junior high/high school offering grades 1 - 6 and 7 - 10 respectively, for dependents of servicemen and women from nearby bases including RAF Chicksands, RAF Chelveston and RAF Alconbury.

In early 1980, RAF Molesworth was chosen to become a base for the US Air Force’s mobile nuclear armed Ground Launched Cruise Missiles or GLCMs (although the majority of GLCMs were deployed at RAF Greenham Common).

During the early 1980s, the Ministry of Defence completely rebuilt Molesworth. All of the World War II runways, taxiways, bomber hardstands, as well as a 9,000 ft jet runway laid down in the 1950s were removed. Crumbling buildings, mostly from the 1950s were also demolished and removed. In its place an infrastructure to accommodate nuclear missiles (storage bunkers, launch tower, machine guns pits, and such) was built.

On December 12, 1986 the 303d Tactical Missile Wing was activated. However, the missiles and the wing did not stay long; the United States and the Soviet Union signed the Intermediate-Range Nuclear Forces Treaty in 1987 which led to the removal of all nuclear missiles from the base by October 1988. The 303d TMW deactivated on January 30, 1989.

The infrastructure from the 303d TMW is still intact and offers a unique reminder of the Cold War.

On 11 January 1990 the RAF announced new construction would begin later that year to house the US European Command’s new intelligence analysis centre. This facility would become known as the Joint Analysis Center (JAC). The original name of the Joint Analysis Center was supposed to be Joint Intelligence Center. Then UK Prime Minister Margaret Thatcher objected to the name and it was changed.

With the end of the Cold War, the JAC found it necessary to redefine itself in a new era. During the 1990s and into the 21st Century the JAC has provided intelligence support for US and NATO missions in the Middle East and the Balkans while also providing global assistance in the War on Terrorism.