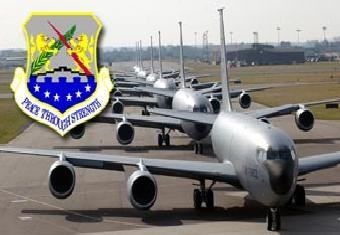 RAF Mildenhall opened on October 16, 1934. King George V reviewed 350 aircraft there in 1935 on the occasion of his Silver Jubilee. This historical event is commemorated by a memorial tablet located in front of the Building 562, the current 100 ARW headquarters. During World War II Mildenhall became a bomber station, flying Vickers Wellingtons, Short Stirlings and Avro Lancasters. It was also the headquarters of 3 Group Bomber Command. From 1950 Mildenhall became home to bombers and later tanker aircraft of the United States Air Force. Throughout the 1950s, Strategic Air Command bomber units were deployed on a regular rotational basis from the United States to the United Kingdom. The B-47 Stratojet was a familiar sight in the skies over RAF Mildenhall and RAF Upper Heyford at this time, as entire wings deployed on 90-day rotations. From 1976 to 1990, the SR-71 Blackbird was flown out of Mildenhall by Detachment 4 of the 9th Strategic Reconnaissance Wing of the USAF. RAF Mildenhall was, until 2003, the home of the largest military-sponsored air show in Europe, when it was cancelled because of increasing operational requirements.

In order to meet a perceived "continental threat", the British military developed the idea to site an RAF bomber base at Mildenhall in the late 1920s. Shortly thereafter, the government purchased the land in 1929, followed by the completion of the first buildings in 1931. Three years later, RAF Mildenhall opened on 16 October 1934, as one of the RAF’s largest bomber stations. On the same day, Wing Commander F.J. Linnell, O.B.E. assumed his position as the base’s first station commander. Although open, the base had yet to receive its first complement of military aircraft.

RAF Mildenhall’s premature inauguration was due in large part with its selection to host the Royal Aero Club’s prestigious MacRobertson Air Race on 20 October 1934. At the time, the air race stood as the longest race ever devised and attracted over 70,000 spectators to the base. Even more telling of the race’s significance in the world’s sporting spotlight, on short notice King George V and Queen Mary visited RAF Mildenhall the day before the race. In the end, pilots T. Campbell Black, and C.W.A. Scott flying the de Havilland Comet "Grosvenor House," crossed the finish line first at Melbourne, Australia, less than 72 hours after starting the race.

Following this propitious beginning, RAF Mildenhall received its first squadron and aircraft with the arrival of 99B Squadron, equipped with Handley Page Heyford bombers.

The threat the RAF had envisioned in the late 1920s materialized during the Munich Crisis. Between 26 September 1938 and 4 October 1939, the base completed its installation of its defense systems. After a brief reprieve from war, the base prepared for war, bringing station defenses and squadrons to full combat readiness. On 3 September 1939, three days after Germany invaded Poland, Britain and France declared war on Germany. Later that same day, three Wellington aircraft from Mildenhall were dispatched to bomb the German naval fleet at Wilhelmshaven
Throughout World War II, RAF Mildenhall remained very active. In addition to its own airfield, the base held responsibility for satellite airfields at Newmarket, Tuddenham, and Lakenheath. During the course of the war, the base witnessed the transition from the two-engine Wellington, to the Short Stirling, and finally to the four-engine Avro Lancaster. For the duration of the war, except for a brief period to have concrete runways laid in 1943, RAF Mildenhall was involved in most of RAF Bomber Command’s many offensives against Germany. While carrying out its operational duties, the base withstood several attacks by the German Luftwaffe, but was never put out of commission (typically, the base’s downtime after an attack lasted until personnel could fill in the damage to the runways).

By the end of the war, aircraft from RAF Mildenhall and its satellite airfields dropped over 23,000 tons of explosives, laid 2,000 mines in enemy waters, and flew over 8,000 sorties. Unfortunately, the base also saw the loss of over 200 Wellington, Stirling, and Lancaster aircraft, and more significantly, the loss of over 2,000 aircrew members. Some of those who paid the ultimate price for peace, including Pilot Officer Rawdon Hume Middleton, an Australian who was posthumously awarded Britain’s highest military honor, the Victoria Cross, are buried at St. Johns Church cemetery in Beck Row

Immediately after the war, RAF Mildenhall participated in humanitarian missions, flying home repatriated prisoners of war, and dropping relief supplies to the Dutch people stranded by the flooding caused by the retreating German Army. By the end of 1945, Mildenhall’s operational activity experienced a drastic decrease, and despite a brief flurry of flying activity in the late 1940s, the RAF reduced the base to "care and maintenance" status. The only remaining RAF unit of significance was Headquarters No 3 Group, Bomber Command, which remained on station until 1967.