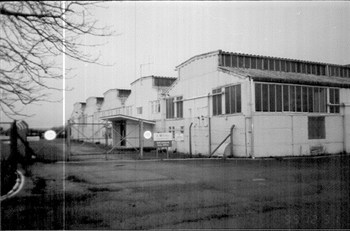 Visitors to Bowerhill on the outskirts of Melksham will sense echoes from the past reflected in road names like Hurricane, Lancaster, Wellington and Halifax which conjure images of a time when gallant deeds were performed in the skies by brave young men. But this is not mere coincidence, because Bowerhill was the site of a major RAF Station which at its zenith accommodated over ten thousand personnel. The official title of the station was No.12 School of Technical Training and, although many local people remember seeing aircraft on display at the annual open days, it was never an operational flying base because it had no runway. The aircraft were used for training purposes for groundcrew and technicians and were transported to and from the base in dismantled form.

RAF Melksham was better known as No 12 School of Technical Training from 1940 to 1965 but also housed No 10 School of Recruit Training and is not so well known as many of the other SoRT’s but it averaged 100 a week of mainly National servicemen until its final intake arrived in June 1953 and passed out on the 17th August and the SoRT unit closed a week later.

The station opened in July 1940, and the first unit to arrive were the School of Instrument Training from Cranwell. They were joined shortly afterwards by a branch of the RAF Armament School and by the end of 1940 the station was “passing-out” over 200 tradesmen each week. In 1942, the Armament School was moved away from Melksham and supplanted by the RAF Electrical School from Hereford, a move which was further enhanced by the arrival of another Electrical School from Henlow in 1944. Although other courses, covering engine trades, motor transport and basic training for both male and female recruits, were covered for shorter periods over the years, the two main trade schools, Instrument and Electrical formed the main purpose of the station for the rest of its operational life until its eventual closure in 1965.

After closure, the site was acquired by the old Bradford and Melksham Rural District Council. This included the married-quarters at Berryfields which were refurbished and let as local authority housing. Some of the larger permanent buildings on the western side were utilised by local businesses such as the Avon Rubber Company and the council began to develop the area around these into a trading estate. The old gymnasium was converted into the Christie-Miller Sports Centre which was opened to the public in 1970. In 1970-71, development of the private housing estate began on the eastern side on land adjacent to the original officer’s quarters near the main gate entrance in Wellington Square.

Today, Bowerhill is a thriving community containing over 1,000 houses together with shops, a public house, primary school, sports centre plus a trading estate containing more than 100 companies large and small. The Melksham Without Parish Council has formed a committee and erected a permanent memorial to the RAF Station.

There were two big dance bands taken from the military band, the Number 1 and the Number 2. The Number 1 was one of the best bands in the R.A.F. These bands were not acknowledged officially as at that time you had to sign on for 5 years to be a musician. But some of the best musicians, who had no wish to sign on, found their way in to these bands. They came from some of the most famous bands in the country. We played on all parades and had normal duties at other times.