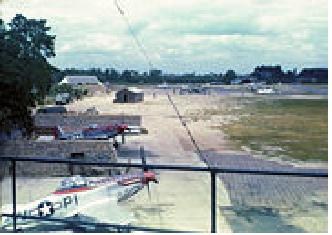 The A&AEE moved to RAF Boscombe Down just prior to the outbreak of hostilities in 1939 and Martlesham then became the most northerly station of No. 11 Group RAF, Fighter Command. Squadrons of Bristol Blenheim bombers, Hawker Hurricanes, Supermarine Spitfires and Hawker Typhoons operated from this airfield, and among the many pilots based there were such famous men as Robert Stanford Tuck, and Squadron Leader Douglas Bader, there as Commanding Officer of 242 Squadron. Ian Smith, the post-war Rhodesian prime minister, was at Martlesham for a time.

In 1943, Martlesham Heath became one of a group of grass-surfaced airfields earmarked for use by fighters of the United States Army Air Forces Eighth Air Force. The airfield was assigned USAAF designation Station 369.

The airfield was opened in May 1943 and was first used by the United States Army Air Force Eighth Air Force 356th Fighter Group, arriving from RAF Goxhill on 5 October 1943. The group was under the command of the 67th Fighter Wing of the VIII Fighter Command. Aircraft of the 356th were identified by a magenta/blue diamond pattern around their cowling.

The group consisted of the following squadrons:

The group flew P-47 Thunderbolts until they were replaced by P-51 Mustangs in November 1944. From October 1943 until January 1944, operated as escort for B-17 Flying Fortress/B-24 Liberator bombers that attacked such objectives as industrial areas, missile sites, airfields, and communications
Fighters from the 356th engaged primarily in bombing and strafing missions after 3 January 1944, with its targets including U-boat installations, barges, shipyards, aerodromes, hangars, marshalling yards, locomotives, trucks, oil facilities, flak towers, and radar stations. Bombed and strafed in the Arnheim area on 17, 18, and 23 September [[ 1944]] to neutralize enemy gun emplacements, and received a Distinguished Unit Citation for this contribution to the airborne attack on Holland.

The group flew its last combat mission, escorting B-17’s dropping propaganda leaflets, on 7 May 1945. It returned to Camp Kilmer New Jersey and was inactivated on 10 November 1945.

With the departure of the USAAF, the airfield reverted to the RAF. In the immediate post-war years, Fighter Command squadrons were in residence at Martlesham but the proximity to Ipswich and the physical limitations on lengthening the runways restricted jet operation. In an effort to improve the station the main runway was extended in 1955.

Early in 1946, the Bomb Ballistics and Blind Landing Unit moved in which, in 1950, was rechristened the Armament and Instrument Experimental Unit (A&IEU) remaining at Martlesham until disbanding in 1957.

An RAF Police flight had also occupied the station from 1951–1953. The following year, the A&IEU was disbanded and the station was retained in reserve status during which time an Air Sea Rescue helicopter unit was in residence.

In 1958, another Reserve Flight arrived and a Station HQ formed; No. 11 Group Communications flight moved in to be followed by HO No. 11 Group. These units were deactivated by the end of 1960, after which the airfield reverted to care and maintenance status before the Air Ministry closed the facility on 25 April 1963.