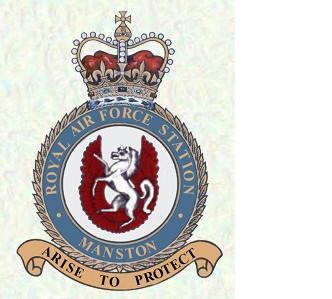 At the outset of the Great War, the Isle of Thanet was equipped with a small and precarious landing strip for aircraft at St Mildreds Bay, Westgate, on top of the chalk cliffs, at the foot of which was a promenade which had been used for seaplane operations.

The landing grounds atop the cliff soon became the scene of several accidents, with at least one plane seen to fail to stop before the end of the cliffs and tumble into the sea, which for the fortunate pilot had been on its inward tide.

In the winter of 1915-1916 these early aircraft first began to use the open farmlands at Manston as a site for emergency landings. Thus was soon established the Admiralty Aerodrome at Manston. It was not long after this that the training school, set up originally to instruct pilots in the use of the new Handley Page bombers, was established, and so by the close of 1916 there were already two distinct units stationed at Manston, the Operational War Flight Command and the Handley Page Training School.

Its location near the Kent coast gave Manston some advantages over the other previously established aerodromes and regular additions in men and machinery were soon made, particularly, in these early days, from Detling. By 1917 the Royal Flying Corps was well established and taking an active part in the defence of England.

At a time when Zeppelin raids were bringing the war directly to English civilians, daylight bombing raids by German ’Gotha’ Bombers, a twin engined biplane, would have been considerably more effective were it not for the RFC’s presence at Manston.

The German air raids had lasted for thirteen weeks, the last being on 22 August 1917. On this occasion, of the 15 bombers that set out for England five did not reach the Kent coast, and the ’spirited’ intervention from Manston based fighters prevented those remaining from flying further west, three being destroyed outright and the remaining seven returning to Germany with dead and wounded on board.

Shortly after such formation raids and in consequence the Cabinet recommended the creation of a separate Air Ministry. The RAF was officially formed on 1 April 1918.

In World War II, during an eventful Battle of Britain, Manston was heavily bombed and airfield buildings destroyed. This caused dispersal of many of the staff to surrounding housing.  Hawker Typhoon attack aircraft were based there later in the war, and also the first Meteor jet squadron of the RAF. It was used as a departure point for airborne forces in Operation Market Garden. It was one of the few airfields installed with the Fog Investigation Dispersal Organisation (FIDO) system designed to remove fog from airfields by burning it off with petrol. Being close to the front-line and having a long and broad runway (currently listed as 2,752 metres x 61 metres) the airfield became something of a magnet for badly damaged aeroplanes that had suffered from ground fire, collisions, or air attack but retained a degree of airworthiness. The airfield became something of a "graveyard" for heavy bombers and no doubt the less-damaged portions of aircraft landing or otherwise arriving here sometimes provided spare parts for other allied aircraft in need of repair. The museums on site displays some startling aerial views dating from this era and the post-war years. Along with Carnaby and Woodbridge, Manston was available as an east coast emergency landing ground for bomber crews.

During the Cold War of the 1950s the United States Air Force used Manston as a Strategic Air Command base for its fighter and fighter-bomber units.

With the USAF’s withdrawal from Manston, the airfield became a joint civilian and RAF airport from 1960 and was thence employed for occasional package tour and cargo flights, alongside its continuing role as an RAF base. The Air Cadets used the northern side of the airfield as a gliding site, and an Air Experience Flight flying De Havilland Chipmunks was based there. Thanks to its broad long runway, (built during World War II, along with Woodbridge’s, to allow returning damaged bombers a longer than usual runway to land on) Manston was used as a diversionary airfield for emergency military and civilian landings.

From 1989 Manston became styled as Kent International Airport, and a new terminal was officially opened that year by the Duchess of York. It is allegedly listed by NASA, although never used, as an emergency diversionary landing strip for the space shuttle programme.

In 1996, Manston’s satellite station RAF Ash, was closed, and in 1999, it was decided to close the RAF Manston base.

The MOD decided to keep the central fire training school (CTE) facility open, and almost the entirety of the ’domestic’ side of the base became FSCTE Manston (for Fire Service Central Training Establishment).

The ’airside’ portion of the base was signed over the commercial operator of Kent International Airport.