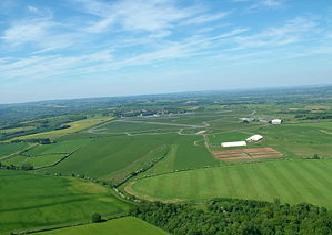 RAF Little Rissington (EGVL) is a RAF Aerodrome and former RAF station in Gloucestershire, England. It was once home to the Central Flying School, the Red Pelicans and the Red Arrows.

Built during the 1930s, the station was opened in 1938 and closed in 1994. The married-quarters and main technical site were sold in 1996 (the former becoming the village of Upper Rissington), but the aerodrome has been retained by the Ministry of Defence and remains active along with the southern technical sites, under the operational control of HQAC at RAFC Cranwell.

I was at Rissy in Coronation year having just returned from an extensive "tour" of the Middle and Far East with Examining Wing, our CO was an Australian Wg.Cdr. Russell Bell, on the trip however it was SQ.LdrAlistair Mackie who led us, we travelled in a Valletta.
The actual day of the Coronation was continual rain, a Fete of some kinds had been arranged, Entertainment Officer flt.Lt. Hutchinson, did a great job but the weather was another matter.
I was the vocalist (as we were called in those days) with the little dance orch, a wooden dance floor was covering the grassed area, the band however were undercover with one exception, me, I was on some kind of dais with the microphone, which of course was on a stand and could not be removed.
How I escaped being electrocuted as I quite literally was "singin in the rain" I will never know.
A great time was had by all, the thing is I have trouble remembering who "all" were now, a few names I recall, Cpl McKenzie and his wife,Gordon Rose, Ron Davey, WRAF ?. Poyser, its a long way back, would love to hear from anyone who was there at Rissy between 51-53.
One very sad memory i have is of the Meteor that crashed with the loss of two lives , during a sports day.

I’m not sure of the actual year (I’ve put 1974). I remember being in the team that first refurbished the Vintage Pair. I can’t remember many of my fellow A/Fitt/A’s in fact the only one I can remember is Sgt Rapley. I remember that the program Star Trek was well liked by many of us at the time. Sgt Rapley cut out a sillouette of the spaceship enterprise and stuck it on to the tail fin.
It was so sad to see some years later the terrible crash that happened with the loss of life and aircraft.

I’ll Never forget it. This was/is a nice Little pub in the quiet village of the Barringtons a few miles from Little Riss’. We had many a good night there. To add to the night’s activities, there was a little river that was close to the pub. Over the river there was a couple of narrow pipes. When we were quiet well pissed we of course had to see who could get across the pipes without falling in the river! Not many of us did actually get to the other side. We would fall in the river and then try again. The more we tried the wetter the pipes. Good Times!