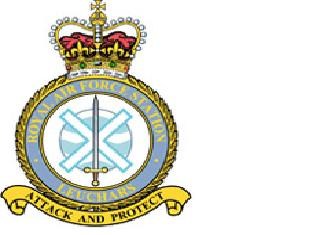 RAF Leuchars  is the most northerly air defence station in the United Kingdom. It is located in Leuchars, Fife, on the east coast of Scotland, near to the university town of St Andrews.

Leuchars is currently home to two squadrons of Panavia Tornado F3s. They are No. 111 Squadron and No. 43 Squadron. Both squadrons operate Quick Reaction Alert which was set up primarily to combat threats from Russian attacks during the Cold War.

The station is also home to No. 125 Expeditionary Air Wing and the East of Scotland Universities Air Squadron (ESUAS) and XII Air Experience Flight (12 AEF) who both use a fleet of seven Tutor T1s.

Leuchars is also the base for No. 612 (County of Aberdeen) Squadron, Royal Auxiliary Air Force (an air-transportable surgical squadron), an RAF Mountain Rescue Unit, and is the airfield of use for the local Air Training Corps units.

The other operational UK air defence bases are RAF Leeming in North Yorkshire which is also equipped with F3s and since June 2007 RAF Coningsby in Lincolnshire which operates the Eurofighter Typhoon F2.

No 125 Expeditionary Air Wing (EAW) was formed at Leuchars on 1 April 2006. The wing encompasses most of the non-formed unit personnel and does not include the flying units based at the station. The station commander is dual-hatted as the commander of the wing.

In 2007, an extension of the runway which, as of 2006, is currently 3,500 metres (11,000 ft) long, will take place due to the arrival of the Typhoon. Because of the runway extension, the three main squadrons are to be re-sited for the duration of the work. 43(F) SQN will operate from RAF Leeming and RAF Akrotiri over this period. ESUAS and 12 AEF will operate from Fife Airport, Glenrothes.

I worked in 43 Squadron during the last six months of my service and I have a photo taken of the whole squadron on 22nd July 1959.
If you would like a copy I’ll email it to you.