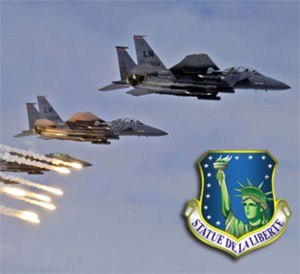 The first use of Lakenheath Warren as a Royal Flying Corps airfield was in World War I when the area was made into a bombing and ground-attack range for aircraft flying from elsewhere in the area. It appears to have been little used and was abandoned when peace came in 1918

In 1940, the Air Ministry selected Lakenheath as an alternative satellite for RAF Mildenhall and was first used as a decoy airfield. Prior to actual construction, false lights, runways and aircraft diverted Luftwaffe attacks from the nearby RAF Mildenhall.

Lakenheath Airfield was initially used by RAF flying units on detachment late in 1941. As planned, the station soon functioned as a Mildenhall satellite with Stirling bombers of No. 149 Squadron being dispersed from the parent airfield as soon as conditions allowed. The squadron exchanged its Vickers Wellingtons for Stirlings late in 1941. After becoming fully operational with its new aircraft, the squadron moved into Lakenheath in April 1942 and remained in residence until 1944.

Taking part in more than 350 operations, of which more than half involved mine-laying, 149 Squadron had one of the lowest percentage loss rates of all the Stirling squadrons. One of No. 149’s Stirling pilots, Flight Sergeant Rawdon Middleton, was posthumously awarded the Victoria Cross for his valour on the night of November 28/29, 1942 when he sustained serious face wounds from shell-fire during a raid on Turin. Despite great pain and loss of blood, he determinedly brought the damaged aircraft back to the coast of southern England. With fuel nearly exhausted his crew were ordered to bail out. Middleton was killed when the Stirling, BF372 OJ-H, crashed into the English Channel.

In early 1943 three T-2 hangars were erected on the north side of the airfield for glider storage, some 40 Horsa Gliders being dispersed at Lakenheath during that year.

In June 1943 No. 199 Squadron was established as a second Stirling squadron at Lakenheath. Commencing operations on 31 July, it was engaged principally in mine-laying during the winter of 1943-44. At the end of April 1944, after 68 operations, the squadron was transferred to No. 100 Group for bomber support operations moving to RAF North Creake in May 1944.

No. 149 Squadron ended its long association with RAF Lakenheath the same month, taking its Stirlings to RAF Methwold. Between them the two squadrons lost 116 Stirling Bombers in combat while flying from Lakenheath.

The reason for the departure of the two bomber squadrons was Lakenheath’s selection for upgrading to a Very Heavy Bomber airfield. Lakenheath was one of three RAF airfields being prepared to receive United States Army Air Force Boeing B-29 Superfortresses which were tentatively planned to replace some of Eighth Air Force’s Third Air Division B-24 Liberator groups spring of 1945.

The work entailed removal of the existing runways and laying new ones comprising 12 inches of high-grade concrete. The main at 07-25 was 3,000 yards long; the subsidiaries, 01-19 and 14-32, both 2,000 yards; all three being 100 yards wide. Part of the A1065 road between Brandon and Mildenhall was closed and a new section built further to the east on the Warren. During the peak period of construction over 1,000 men were working on the site; yet instead of the 12 months planned, it took 18 months for the ground work alone and 2 1/2 years before Lakenheath’s transformation was complete. The cost was nearly ?2 million.

By the time construction ended the war with Germany was over and RAF Lakenheath was put on a care and maintenance status.