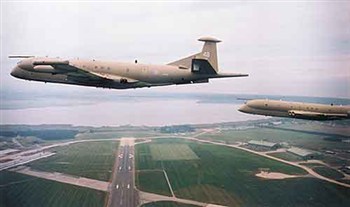 RAF Kinloss (IATA: FSS, ICAO: EGQK) is a Royal Air Force station. It is near Kinloss, on the Moray Firth in the north of Scotland. The station is home to all of the Nimrod MR2 fleet in the Royal Air Force.

Numbers 120 and 201 squadrons, plus 42(R) squadron (the Operational Conversion Unit), equipped with the Nimrod MR2 are based at Kinloss. The station is also home to No. 325 Expeditionary Air Wing. 663 VGS operating the Vigilant TMk1 is also based at RAF Kinloss.

The UK Aeronautical Rescue Coordination Centre is another major unit at Kinloss. The ARCC is responsible for coordinating all rescue efforts within the UK and out into the Atlantic. This includes the receipt of signals from rescue beacons, and the dispatch and control of Nimrod aircraft and Search and Rescue helicopters.

Who remembers the Raft Races that were held across Findhorn Bay in the 70’s/80’s? I can. I even took part in one or two.
I cannot, now, recall if it was a Kinloss thing, or an NMSU thing. I do recall the stench caused by the Painter’s raft one year. This was caused by them mixing too much hardener into a resin. This was their ’secret weapon’ and produced many - nay - many, many cubic metres of foul smelling, white acrid smoke, issuing forth from the installed sonar bouy tubes.
I cannot imagine anyone being allowed to do it now, as the tidal race is quite legendary and the potential for ending up in Norway or some such, must be quite - well - large, really.
Happy days!

Hardest 3 weeks I ever spent whilst training with the team during the winter 1978/1979 apparently it was the coldest, snowiest winter for a hundred years. All I remember was waist deep snow and exhaustion mind you Glen Affric was incredibly beautiful that winter. What really made it hard for me was prior to joining the team my only hill locally was Malvern, 1,360 ft ( not exactly the Alps!)