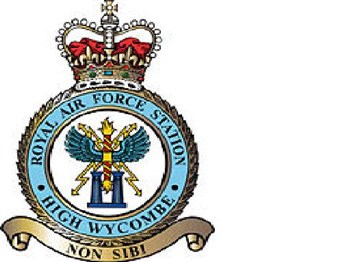 RAF High Wycombe is a Royal Air Force station, situated in the village of Walters Ash, near High Wycombe in Buckinghamshire, England. Its purpose is to serve the needs of the RAF Air Command, situated on the site. It is also the headquarters of the European Air Group. The motto of RAF High Wycombe is ’Non Sibi’, which translates as ’not for ourselves’

RAF High Wycombe is situated roughly three miles from the town of High Wycombe over three sites - No 1 Site houses the Command HQ and the Combined Air Operations Centre (CAOC- UK CAOC or CAOC 9), No 2 Site houses the officers’ mess, while No 3 site is the domestic site, airmen and NCO’s quarters, MT yard, PT flight and Supply Flight. There is a nuclear bunker at the site the existence of which is officially classified but which nevertheless is clearly visible on satellite photographs (e.g. Google Earth).

moving to High Wycombe from Stanm ore just before Xmas 1972. The w/e trips to various places in the South. Rugby trips George Armstrongs wedding in Finaghy. Thre 2 holidays in Tenerife one in August 75’ with Allan Hudd John Sugden etc. Wimbledon speedway to see Allans cars get wrecked. Then many drunken nights in the village or the NAAFI. My farewell do in the social club. The 2nd trip to Tenerife for New Year 1976 to celebrate my demob

All my pals in the RAF Police Flight at High Wycombe, not forgetting some of the WRAF girls Yvonne in the PBX, Pat Oliver.

Playing football with a firebucket on the roof of Nimrod block on a Sunday afternoon after a heavy session, taking a kick and missing and falling off the roof onto the grass behind, getting up and staggering off to bed totally unhurt while "friends"stood on the roof and clapped.