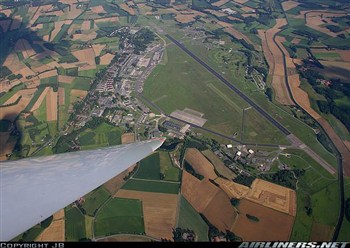 The former Royal Air Force Station Gutersloh, more commonly known as RAF Gutersloh, was a Royal Air Force Germany airbase, the nearest Royal Air Force air base to the East/West German border. It was constructed by the Germans prior to World War II. The base was captured by the Americans in April 1945 it was handed over to the RAF in June 1945 as Headquarters No. 2 Group RAF.

See Service History in my Profile

WO JT laughed uproariously when I asked to go to Medics for op to remove a Cyst. "Whatever will they do when they cut your head open and find it empty?" He chortled. "Promote me to WO" I replied. He was very unhappy.
Teaching Adrian Needham to play Chess during long night shifts. He was the only Officer who insisted on staying awake all night. Respect.
Working at Bertelsmanns with Jim Parr and cutting up old German military calendars to frame and sell. Jim and Patricia lived within sight of the Cinema and Pat wanted Jim to take her there. (It was the EROS cinema)

England win the World Cup. RAF Gutersloh my favourite station of all time. I was an air mover working in the Joint Services Air Movements Unit. For the World Cup Final we set up the passenger lounge similar to a cinema. There were as many Germans watching the television as there were english service men. The atmosphere was electric, imagine the deep satisfaction at looking at all those sad german faces and the delighted English making the most of it, when Geoff Hurst scored that winning goal. I write this today 26th Aug 2010, a couple of weeks ago my wife and I were in the Cafe on Cheltenham railway station. Guess what there was Geoff Hurst just sat there having a coffee, my wife had to restrain me from bothering him, I just felt I wanted tell him all about the above. I expect Geoff was greatfull not to be bothered ! I