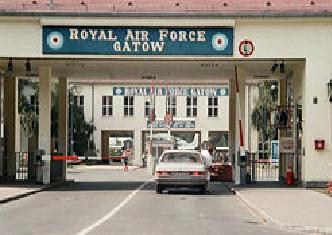 The airfield was originally constructed in 1934 and 1935 by the Luftwaffe as a staff and technical college, Luftkriegsschule Berlin-Gatow, in imitation of the Royal Air Force College at Cranwell. The initial personnel came partially from the naval officer college in Murwick. Opened on 1 April 1936, the air force college was re-named Luftkriegsschule 2 on 15 January 1940. Its satellite airfields were Guterfelde and Reinsdorf. Airborne flying training ended in October 1944, due to fuel shortages. From 5 March 1945, aircrew officer cadets were retrained as paratroops, for ground operations which had very high casualties.

Late April 1945, towards the end of World War II in Europe, the airfield was occupied by the advancing Red Army. Following the division of Berlin into four sectors, Soviet forces relinquished the airfield to the British after the Potsdam Conference (in exchange for Staaken-Dallgow airfield). On 25 June 1945, 284 Field Squadron, RAF Regiment, arrived at Gatow by land via Magdeburg. Their reception by Soviet troops was extremely hostile, the Soviets attempting to confine 284 Field Squadron behind barbed wire fences, as the Squadron was said to have arrived "too early". This set the pattern for relations, with Soviet checkpoints being set up beside the airfield manned by fully armed and unfriendly troops. RAF Regiment officers occasionally surveyed Soviet positions by air from Avro Ansons, and the tour of duty of RAF Regiment detachments at Gatow was limited to six months, because of the constant activity occasioned by the Soviet presence and the Berlin Airlift.

During the Berlin Airlift, the Station was modernised with a 2,000 yards (1,800 m) long concrete runway, using 794 German workers, in March 1947. Along with the American airfield of Tempelhof and the French airfield of Tegel, RAF Gatow played a key role in the Berlin airlift of 1948. Initially, about 150 Douglas Dakotas and 40 Avro Yorks were used to fly supplies into Gatow. By 18 July 1948, the RAF was flying 995 tons of supplies per day into the airfield.

RAF Gatow has the unique and unlikely distinction of being the base for the only known operational use of flying boats in central Europe, during the Berlin Blockade, on the nearby Gro?er Wannsee in the Havel river. 0n 6 July 1948, the RAF began using 10 Short Sunderland and 2 Short Hythe flying boats, flying from Finkenwerder on the Elbe near Hamburg to Berlin. These were supplemented by the flying boat operations of Aquila Airways, an early post-war Independent British airline that was eventually absorbed into British United Airways. The flying boats’ speciality was transporting bulk salt, which would have been very corrosive to other aircraft, but was not as corrosive to the flying boats because of their normal use for maritime operations.

After the Berlin Blockade, RAF Gatow served as an airfield for the British Army’s Berlin Brigade, and was prepared to revert to its role as a supply base, if another Berlin Airlift to West Berlin ever became necessary.