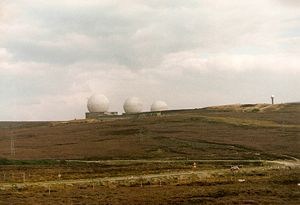 RAF Fylingdales is a British Royal Air Force station on Snod Hill in the North York Moors, England. Its Motto is "Vigilamus" (translates to "We are watching"). It is a radar base and part of the United States-controlled Ballistic Missile Early Warning System (BMEWS). As part of intelligence-sharing arrangements between the United States and United Kingdom

The station was built by the Radio Corporation of America (RCA) in 1962, and was maintained by RCA (Great Britain), now Serco Group plc. RAF Fylingdales consisted of three 40-metre-diameter ’golfballs’ or geodesic domes (radomes) containing mechanically steered radar. It became a local tourist attraction as a result. Coach tours to the nearby coastal town of Whitby drove past the site, at which point drivers would typically switch the radio on and allow passengers to listen to the interference caused by the radomes.

Between 1989 and 1992, Raytheon, the US defence contractor, completed a contract that saw the domes replaced by the current tetrahedron (’pyramid’) structure, housing the Active Electronically Scanned Arrays or AESA (phased array) radar.