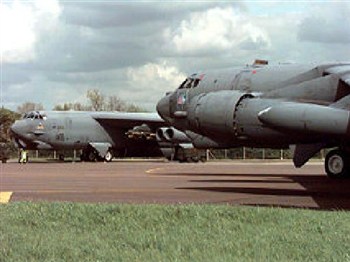 RAF Fairford  is a Royal Air Force station in Gloucestershire, England. It is currently classified as a standby airfield, not in everyday use. Its most prominent use in recent years has been as a base for United States Air Force B-52s during the 2003 Iraq War, Operation Allied Force in 1999, and the first Gulf War in 1991.

RAF Fairford is the only TransOceanic Abort Landing site for NASA’s Space Shuttle in the UK. As well as having a sufficiently long runway for a shuttle landing (the runway is 3 km long), it also has NASA-trained fire and medical crews stationed on the base.

RAF Fairford is also the home of the Royal International Air Tattoo, an annual air display. RIAT is one of the largest airshows in the world, with the 2003 show recognised by Guinness World Records as the largest military airshow ever, with an attendance of 535 aircraft.

RAF Fairford was constructed at the height of World War II in 1944 to serve as a base for British and American troop carriers and gliders for the D-Day invasion of Normandy.

In the early years of the Cold War the British and American governments reached an agreement under which elements of the USAF Strategic Air Command (SAC) would be based in the UK. Bases had already been established in East Anglia -- at RAF Mildenhall and RAF Lakenheath -- but they were considered to be too vulnerable to bomber attack and airfields further behind the RAF fighter defences were sought. Four RAF airfields were selected to receive SAC units -- RAF Brize Norton, RAF Fairford, RAF Greenham Common and RAF Upper Heyford. In 1948 the Americans occupied RAF stations including Fairford, Brize Norton, Burtonwood Greenham Common, Mildenhall, Lakenheath and Woodbridge to build up a deterrent in Europe against the Soviets.

In 1950, as a result of the beginning of the Cold War, the base was transferred to the U.S. Air Force for strategic bomber operations. In order to facilitate long range bomber operations a 10,000-foot (3,000 m) runway was constructed.

The runway was completed in 1953, and served as a forward airbase for the first Convair B-36 Peacemaker aircraft from Carswell Air Force Base, Texas. The base later received B-47s which were maintained at a heightened state of alert because of increased tensions with the Soviet Union.

Following a period of transition, Fairford was chosen in 1969 as the British test centre for the Concorde aircraft. The Concorde was tested at RAF Fairford until 1979, when the U.S. Air Force returned with a squadron of KC-135 Stratotankers. These tankers would play a major role in supporting the attack on Libya in 1986. The KC-135s were withdrawn in 1990 and the base was returned to standby status.

Due to RAF Fairford’s location and infrastructure, the airbase is designated as a forward operating location for the U.S. Air Force. In this capacity, it was used in the first Gulf War in 1991, with B-52’s and KC-135’s from Eaker AFB in Arkansas Operation Allied Force in 1999, and during the 2003 Iraq War. During these three conflicts, the airbase was the home to American B-52, B-1 Lancer, and KC-135 aircraft, and their support personnel. In recent years the airfield has been used by American B-2 Spirit stealth bombers.

Due to increased operational levels, RAF Fairford underwent a $90 million upgrade of its runway and fuel bunkers in the largest American military construction project within a NATO country since the end of the Cold War. This worked lasted from 2000 through 2002.

RAF Fairford is used as one of many Transatlantic Abort Landing sites located in western Europe for the NASA Space Shuttle.