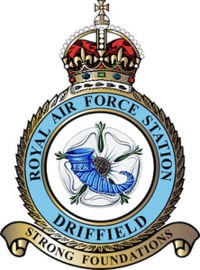 RAF Driffield was a Royal Air Force station situated near Driffield in the East Riding of Yorkshire, England.

The station was initial posting base of Leonard Cheshire, a legendary RAF figurehead.

On the 3rd April 1959, the base was armed with Thor ballistic missiles, which were subsequently decommissioned.

Upon closure by the RAF, it became an Army site called Alamein Barracks, a satellite to Normandy Barracks at Leconfield (Defence School of Transport).