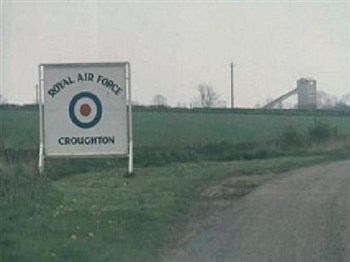 RAF Croughton was built in 1938, this base was first known as Brackley Landing Ground until 1940 when it became RAF Brackley. In July 1941 the name changed again and the station became RAF Croughton.

It consisted of 694 acres consolidated from three farms. Three grass runways with concrete taxiways dominated the high ground with the tower and other infrastructure buildings along the north side of the station and the slope leading up to the runways. In June 1940 the station became a satellite for RAF Upper Heyford for No.16 Operational Training Unit to provide the unit with extra airfield space for night-flying training. Much of this training was for Commonwealth pilots (Canadians, South Africans, Australians, and New Zealanders) on Handley Page Hampdens, Bristol Blenheims, and Wellington bombers. The unit fell under the operational control of the newly formed No. 7 Group of Bomber Command.

In September 1940 the Air Ministry decided that certain stations would be designated as emergency airfields. These stations would give assistance to any operational aircraft returning damaged or with engine problems. The Station Commander at RAF Upper Heyford received one of these orders. RAF Brackley (Croughton) would remain open with its flare paths illuminated irrespective of enemy activity in the area. This meant that RAF Brackley along with other emergency airfields attracted additional enemy night attacks. Added to this accepted high risk was the fact that RAF Brackley was a training airfield. During the war both sides considered it worthwhile to attack and disrupt training programs. Because training fields and aircraft were lightly defended, they made for easier targets. For these reasons, it was not uncommon for the station or training crews conducting night training to receive the attention of the Luftwaffe.

While the station remained a satellite for RAF Upper Heyford and No. 16 OTU until July 1942 and even partially re-equipped with Wellington bombers, its future had already changed. No. 23 Squadron of Flying Training Command (FTC) was desperately seeking a suitable airfield to re-house its No. 1 Glider Training School (GTS). Its current home was a small airfield at Thame in Buckinghamshire and FTC felt it inadequate for glider training. Several airfields in the near vicinity made the short list, but RAF Croughton became the new home for the gliders. On 19 July 1942, No. 1 GTS began to move in and by 1 August 1942 they were settled into their new home. During this training Hawker Hectors, American Harvards, and Miles Masters pulled Hotspur gliders, while DC-3s pulled the larger Horsa gliders.

With this new mission came a far stricter training regime and standards than that usually found at an RAF training station. The reason for this was the dual roles required of the glider pilots. They would receive 12 weeks of basic flying training, before moving to one of the GTS. Training at the GTS took another 12 weeks. From there they would move onto their operational units. In addition to flying the gliders, pilots had to be as highly trained and disciplined as infantry troops. This way they could make a positive contribution to the battle after landing in the assault areas. However, they would only remain in the assault area until their recovery. By the end of 1942 the RAF thought it had enough trained glider pilots, at least for foreseeable operational need. There was now a large number of trained glider pilots and this led to its own problems and another change in the mission of RAF Croughton
As the last class passed out of RAF Croughton on 24 March 1943, the glider school closed down. It continued to be a training base, but now it was a satellite for Kidlington in Oxfordshire where the No. 20 (Pilot) Advanced Flying Units (AFU) gave refresher or advanced training to pilots