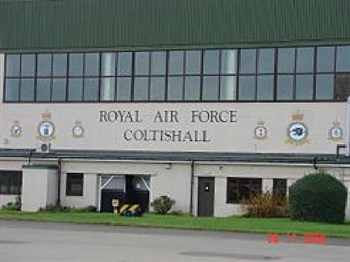 It was a fighter base in the Second World War and afterwards a base for night fighters then ground attack aircraft until closure.

After longstanding speculation, the future of the station was sealed once the Ministry of Defence announced that the Typhoon, a rolling replacement aircraft, displacing the ageing Jaguars, would not be based there. The last of the Jaguar squadrons left on 1 April 2006 and the station finally closed, one month early and ?10 million under budget, on 30 November 2006.

The station motto was Aggressive in Defence. The station crest is a stone tower surmounted by a mailed fist grasping three bind bolts (arrows), which symbolised a position of strength in defence of the homeland, indicative of the aggressive spirit which Coltishall fighter aircraft were prepared to shoot down the enemy.

Many a night spent with all the coppers getting smashed and playing darts, but does anyone remember the night they set the trap for a particular Sgt who had been stalking me. Ginger and others helped me to catch him in the act and I was terrified walking back to the block as planned. Also catching me in the mens block drunk as a lord, the give away was my platform sandals, my mate Bimbo forgot to hide them!!

Hi. Does anyone know the wherabouts of any of the guys in the att photo?

Great detachment lovely weather, changed so much in Las Vegas over the years amazing.