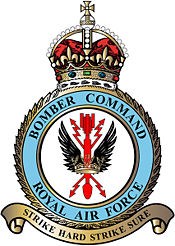 Bomber Command moved to its new headquarters near High Wycombe early in 1940. Its commander-in-chief, Sir Edgar Ludlow-Hewitt, moved into a centre that had direct communications with all bomber groups and stations in Great Britain. He also had direct communications with Fighter Command and the Air Ministry. Many of the senior officers in Bomber Command were experienced from World War One but none of them had experienced modern bombing as seen at Guernica in the Spanish Civil War.
RAF Bomber Command controlled the RAF’s bomber force from 1936-1968. During the Second World War, it destroyed many German cities and several of Nazi Germany’s industries. In the 1960s, it became even more powerful because it had V Bombers and Canberras. Twenty-three members won the Victoria Cross and in 2006 a memorial was placed in Lincoln Cathedral to recognise this. In 1968, Bomber Command and Fighter Command were merged together to form a new organisation called Strike Command.

“Operation Chastise” (“Dambusters Raid")
In February, 1943, the Royal Air Force decided to plan an attack on the five hydroelectric dams on which the Ruhr industrial area depended. Barnes Wallis advised the Royal Air Force to use the new bouncing bomb he had been developing at the National Physics Laboratory in Teddington, Middlesex, England.
Guy Gibson was selected to take part in “Operation Chastise” also known as “Dambusters Raid”. The targets were the three key dams near the Ruhr area, the Möhne, the Sorpe and the Eder Dam on the Eder River. It was hoped that the raid would result in the loss of hydroelectric power and the supply of water to nearby cities. The success of the operation involved precision bombing. The cylindrical bombs developed by Barnes Wallis had to be dropped from 60 feet to skip into the dam face and roll down it to explode at a depth that triggered a pressure fuse. The pilots had to judge the critical release point by using dual spotlights whose beams converged vertically at 60 feet.

The aircraft used were adapted Avro Lancasters. To reduce weight, much of the armour was removed, as was the mid-upper turret. The substantial bomb and its unusual shape meant that the bomb doors were removed and the bomb itself hung, in part, below the body of the aircraft. The crews practised over the Eyebrook Reservoir, the Derwent Reservoir and the Fleet Lagoon at Chesil Beach. The final test flights took place on 29th April 1943.

Now that plans to implement Chastise were in place, a squadron would be needed to fly the mission. At the time 5 Group was the only one flying Lancaster bombers. The squadron would have to come from within this group, as they were they only one with Lancaster experience. Finding a squadron from within the group would be a problem. Harris was reluctant to withdraw a whole Lancaster squadron from the main force for the duration of the dam’s mission. A new squadron would have to be formed made up of tour-served crews who would be coming off ops having completed their set number of missions. The new squadron would be 617 Squadron later becoming known as “The Dambusters”. Although many believe that 617 squadron was formed from the very best, highly decorated pilots and aircrew in the allied force. This was far from the truth, the majority of the squadron had no decorations at all and instead of having flown two tours, some were only one third of the way through their first tour. For some of the flight engineers, the dam’s raid was their first operational sortie. The new squadron would share RAF Scampton with resident 57 squadron.

How successful was the raid - Severe flooding occurred where the Möhne Dam was breached. 1,200 people were killed including nearly 600 forced labourers from Eastern Europe who were housed in a labour camp near Neheim. Six small electricity works were damaged and rail lines passing through the Möhne Valley were disrupted. But industrial production was not affected in the long-term. When the Eder Dam broke, there were similar results. Kassel, an important arms producing town, was reached by the floodwater, but little actual damage was done. Had the Sorpe Dam been breached, then the damage would have been much greater. The potential for a major disaster was recognised by Albert Speer who commented that: "Ruhr production would have suffered the heaviest possible blow."

The damage done by the 617 squadron was repaired quite quickly. But the most important impact of the raid was that 20,000 men working on the Atlantic Wall had been moved to the Ruhr to carry out repairs to the damaged and breached dams. This work was completed before the rains of the autumn appeared.

The bombing of specific military and strategic targets became more important as the war progressed, as the raid on Schweinfürt demonstrated. The raid by 617 Squadron was part of this approach.