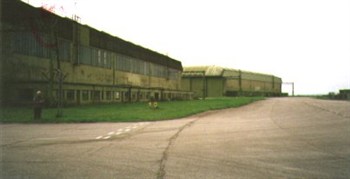 RAF Binbrook, located at Binbrook, England, was opened as a Bomber Command station in June 1940 during World War II. It closed in 1942 for the installation of concrete runways, reopening in 1943 as home to 460 Squadron, Royal Australian Air Force. Post-war, Binbrook was home to a number of distinguished RAF bomber squadrons, notably IX, 12, 101 and 617, all four of which were there for more than a decade. The airfield saw the start of the RAF’s transition to jet bombers with the arrival of the first English Electric Canberras.

After the departure of IX and 12 squadrons in 1959, Binbrook housed Gloster Javelin all-weather fighters belonging to 64 squadron, as well as the Central Fighter Establishment. 85 Squadron also moved to Binbrook with a mixture of Canberras and Gloster Meteors in the target facilities role.

From 1965, Binbrook was the home to the English Electric Lightnings of 5 Squadron, joined by the similarly-equipped 11 Squadron in 1972. 5 and 11 were the last two RAF squadrons to employ the Lightning. 5 Squadron re-equipped with the Tornado F3 at RAF Coningsby early in 1988, leaving 11 Squadron to soldier on at Binbrook for a few more months with the remaining few Lightnings in RAF service. When 11 Squadron disbanded (to re-equip with the Tornado F3 at RAF Leeming), the station closed and was subsequently sold off for development.

RAF Binbrook served as the American airbase in the 1989 movie Memphis Belle.

Swifty n Bruce crashing bike into drain in Cyprus. Rodger removing keys and crashing into crew room wall on the open top tractor. Mally? I wont mention flares! Gate guard with a pick axe handle - 24 hour stints (wot a breeze). Robby swapping rooms with me in Cyprus haha. Booking out of block on exercise n climbing back in window to save being hauled out when it went RED - happily sleeping through end ex.
Clachy "First start of the day gentlemen" in that irish twang - RIP - one of the better zobs
It was not me it was the other shift!!!! PEN IT !!!!!!!!!!!!

Old camp but brilliant, lots and lots if exercises/tacivals,Scotty and the lineys having fun with other people!!!!! best aircraft I worked on but leaked a lot!
Cottesmore, Showpiece camp and no exercises! - not one in 6 years!