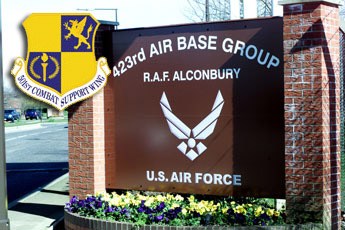 RAF Alconbury is a Royal Air Force station adjacent to the Stukeleys, near Alconbury and Huntingdon, Cambridgeshire in the United Kingdom, about 60 miles (100 km) north of London.

Its runway and flight line were closed in the mid-1990s and it is currently a non-flying facility under the control of the United States Air Force. It is one of three RAF bases in Cambridgeshire currently used by the United States Air Forces in Europe (USAFE). Alconbury, along with RAF Molesworth and RAF Upwood are considered the "Tri-Base Area" due to their close geographic proximity, and interdependency.

RAF Alconbury and RAF Molesworth are the last World War II-era Eighth Air Force bases in England that are still actively in use and controlled by the United States Air Force.