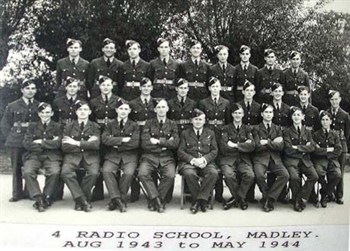 RAF Madley Radio School was acquired at the end of 1940 in response to a need for training bases away from the threat of German bombers. Entering operation whilst still under construction the 3.5 square mile site, one of the largest RAF bases in Britain, was soon providing training for both Ground and Air crew. The main courses were in Morse and Wireless operation, in flight practice being carried out in Dominie and Proctor aircraft. The base also developed a mountain rescue unit to retrieve crashed and downed crews in the Brecon Beacons and elsewhere. But training covered a multitude of other areas too, such as surviving ditching at sea, jungle warfare, street fighting, how to escape if captured and much besides.

My late father Ronald Eedy (RAAF) was an instructor(?) at Madley. He met his future wife, radio operator Bridget Curry (from Co. Wicklow, Eire) at Madley around April 1945 and they married in Hereford September 1945
I wondered if anyone here knew them
Regards Peter Eedy (Brisbane Australia) peter dot eedy at gmail dot com