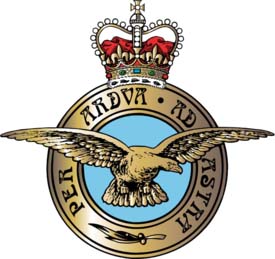 While the British were not the first to make use of heavier-than-air military aircraft, the RAF is the world's oldest independent air force: that is, the first air force to become independent of army or navy control. It was founded on 1 April 1918, with headquarters located in the former Hotel Cecil, during the First World War, by the amalgamation of the Royal Flying Corps (RFC) and the Royal Naval Air Service (RNAS). After the war, the service was drastically cut and its inter-war years were relatively quiet, with the RAF taking responsibility for the control of Iraq and executing a number of minor actions in other parts of the British Empire. Naval aviation in the form of the RAF's Fleet Air Arm was returned to Admiralty control on 24 May 1939.

The RAF developed its doctrine of Strategic bombing which led to the construction of long-range bombers and became the basic philosophy in the Second World War.

The RAF underwent rapid expansion prior to and during the Second World War. Under the British Commonwealth Air Training Plan of December 1939, the air forces of British Commonwealth countries trained and formed "Article XV squadrons" for service with RAF formations. Many individual personnel from these countries, and exiles from occupied Europe, also served with RAF squadrons.

In the Battle of Britain, in the late summer of 1940, the RAF (supplemented by 2 Fleet Air Arm Squadrons, Polish, Czechoslovakian and other multinational pilots and ground personnel) defended the skies over Britain against the German Luftwaffe, helping foil Hitler's plans for an invasion of the United Kingdom, and prompting Prime Minister Winston Churchill to say in the House of Commons on 20 August, "Never in the field of human conflict was so much owed by so many to so few".

The largest RAF effort during the war was the strategic bombing campaign against Germany by Bomber Command. While RAF bombing of Germany began almost immediately upon the outbreak of war, under the leadership of Air Chief Marshal Harris, these attacks became increasingly devastating from 1942 onward as new technology and greater numbers of superior aircraft became available. The RAF adopted night-time area bombing on German cities such as Hamburg and Dresden, and developed precision bombing techniques for specific operations, such as the "Dambusters" raid by No. 617 Squadron, or the Amiens prison raid known as Operation Jericho.