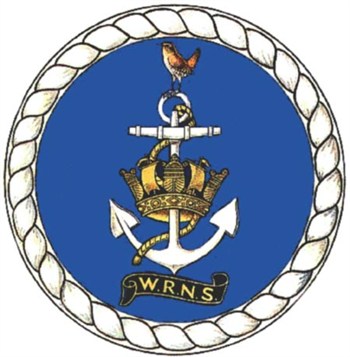 The Women's Royal Naval Service (popularly and officially known as the Wrens) was the women's branch of the Royal Navy.

Members included cooks, clerks, wireless telegraphists, radar plotters, weapons analysts, range assessors, electricians and air mechanics. It was formed in 1917 during the First World War, and by the end of the war had 5,500 members, 500 of them officers. In addition, about 2000 members of the WRAF had previously served with the WRNS supporting the Royal Naval Air Service and were transferred on the creation of the Royal Air Force.

It was disbanded in 1919, and revived in 1939 at the beginning of the Second World War, with an expanded list of allowable activities, including flying transport planes. At its peak in 1944 it had 75,000 people. During the war there were 100 deaths.

It remained in existence after the war and was finally integrated into the regular Royal Navy in 1993. Women sailors are however still known as wrens or Jennies (Jenny Wrens) in naval slang.

Before 1993, all women in the Royal Navy were members of the WRNS except nurses, who joined (and still join) Queen Alexandra's Royal Naval Nursing Service, and medical and dental officers, who were commissioned directly into the Royal Navy, held RN ranks, and wore WRNS uniform with gold RN insignia.