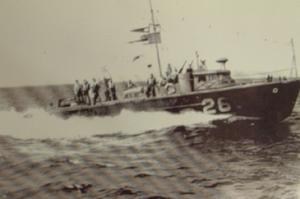 Inaugurated as the Marine Craft Section just eleven days after the Royal Air Force itself was founded, it initially provided back-up for the flying boats but it also developed a rescue service which during and after the second world war became the largest in the world. During the war years alone over 13,000 lives were saved by the crews of the high speed rescue launches who faced enemy action and all weathers to uphold their pledge of "The Sea Shall Not Have Them".

The launches were involved in many major actions; at Dunkirk five seaplane tenders were deployed rescuing 500 troops from the beaches; at Dieppe 14 launches were in action three of which were destroyed by enemy action and 93 launches were involved in the supporting maritime landing operations on D Day. Launches also supported operations in the Middle East, Malta and Italy and also in the Far East, India, Burma, Malaya and Ceylon. The launches also carried out clandestine operations in Greece, Turkey and occupied Europe. Post-war, amongst other duties, the branch was involved in secret submarine location work, surveys and anti-terrorist patrols. By 1986 the more versatile helicopter had taken over the rescue work and finally the branch was privatized its few remaining maritime activities being taken over by civilian contractors. courtesy of Air Sea Rescue & Marine Craft section Club.