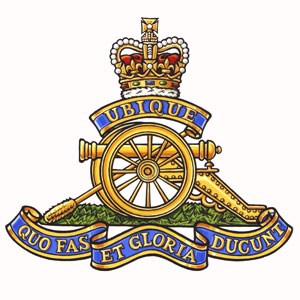 The first recorded use of cannon on the battlefield was by Edward III at the Battle of Crecy in 1346 during the Hundred Years' War. Up to the eighteenth century, artillery ‘traynes’ were raised by Royal Warrant for specific campaigns and disbanded again on their conclusion. This changed on 26 May 1716, when by the Royal Warrant of George I two regular companies of field artillery, each 100 men strong, were raised at Woolwich, leading to the title "Royal Artillery" (RA) which was first used in 1720.

On 1 April 1722 these companies were expanded to four, and grouped with independent artillery companies in Gibraltar and Minorca to form the Royal Regiment of Artillery, commanded by Colonel Albert Bogard. In 1741 the Royal Military Academy formed in the Royal Arsenal, Woolwich (RWA). The regiment expanded rapidly and by 1757 there were 24 companies divided into two battalions, as well as a Cadet Company formed in 1741.

During 1748 the Presidential Artilleries of Bengal, Madras and Bombay, India were formed and then in 1756 saw the creation of the Royal Irish Regiment of Artillery. The Regiment grew to 32 companies by 1771 organised into four battalions, as well as two Invalid Companies comprising older and unfit men employed in garrison duties. 1782 brought the move of the Royal Artillery to RA Barracks (front parade) on Woolwich Common.

The Napoleonic Wars saw the need to provide fire-support for the cavalry so a formation of Horse Artillery was created in 1793 with two troops of Royal Horse Artillery (RHA) being raised, joined by two more in November 1793. The Royal Irish Artillery was absorbed into the Royal Artillery in 1801 to produce twelve RHA troops and a hundred RA companies in 10 battalions. Before 1825 batteries had been called after their commander's name this was to cease and RA batteries known by a number and RHA batteries a letter. During 1805 RWA moved to Woolwich Common for all RA and RE officers.

On 1 July 1899, the Royal Artillery was divided into three groups: the Royal Horse Artillery and Royal Field Artillery comprised one group, while the Coastal Defence, Mountain, Siege and Heavy artillery were split off into another group named the Royal Garrison Artillery. The third group continued to be titled simply Royal Artillery, and was responsible for ammunition storage and supply. The RFA and RHA both dressed as mounted soldiers, whereas the RGA dressed like foot soldiers. The First World War brought with it a massive expanse of the Royal Artillery By 1917 there were 1,769 batteries in over 400 brigades totalling 548,000 men.

In 1920 the rank of Bombardier was instituted in the Royal Artillery. The three sections effectively functioned as separate corps. This arrangement lasted until 1924, when the three amalgamated once more to became one regiment. The Royal Horse Artillery, which has always had separate traditions, uniforms and insignia, still retains a separate identity within the regiment, however, and is considered, by its members at least, to be an élite.

Before the Second World War, Royal Artillery recruits were required to be at least 5 feet 4 inches tall and men in mechanised units had to be at least 5 feet 8 inches tall. In 1938, the Royal Artillery Brigades were renamed Regiments. In the Second World War over a million men were serving in over 960 Gunner regiments. With the coming of peace the Gunners reduced to 250,000 men and 365 batteries in 106 regiments.

At the beginning of 1939 the regular and TA strength of the Royal Artillery totalled about 105,000. In mid 1943 the RA reached its peak strength, some 700,000 strong (about 26% of total British Army strength and about the same size as the Royal Navy), including about 5% officers, in some 630 regiments, 65 training regiments and six officer cadet training units.

These included 130 regiments converted from TA infantry and yeomanry often retaining their previous regimental title as part of their artillery unit designation as well as badges and other accoutrements.  However, the strength of the field branch (including anti-tank) in mid 1943 was about 232,000.  The Regiment suffered some 31,000 killed during the course of the war.

Of the 630 or so regiments about 240 were field artillery, excluding about 60 anti-tank.

At the end of the Second World War, the RA was larger than the Royal Navy. In 1947 the Riding Troop RHA was renamed The King's Troop RHA, and in 1951 the appointment of regiment’s Colonel-in-Chief became Captain General. Following the end of National Service and the Cold War, the Royal Artillery fell further to its lowest strength since the 1820s; 14 Regular and 7 Territorial Artillery Regiments.

The Royal Artillery Prayer
O Lord Jesus Christ,
Who dost everywhere lead thy people in the way of righteousness,
Vouchsafe so as to lead the Royal Regiment of Artillery,
That wherever we serve, on land or sea or in the air,
We may win the glory of doing thy will
Amen