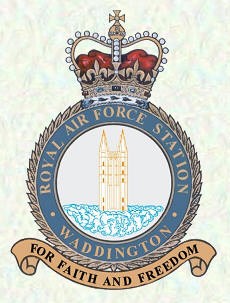 RAF Waddington was opened as a flying training station in November 1916 teaching hundreds of pilots, including many form the US Army to fly until the station was put into care and maintenance in 1920.

It reopened as a bomber base on 12 March 1937, with squadrons flying the Bristol Blenheim and later Handley Page Hampdens.  The airfield was enlarged after 1934, when a major RAF expansion began, with many buildings constructed, including some of the hangars which remain in use today.

The station was re-opened as a bomber base on 12 March 1937, and by the end of year housed squadrons flying the Bristol Blenheim, which were subsequently superseded by Handley Page Hampdens.

Waddington hosted a variety of Lancaster and Avro Lincoln squadrons, and, later, Washingtons. The station was put into care and maintenance again in 1953 to prepare it for the V-bomber force.  83 Sqn being the first in the RAF to receive the Vulcan in May 1957. It continued in this role until 1984 when the last Vulcan squadron, No. 50, disbanded.

In June 1954 the Queen approved the RAF Waddington badge, incorporating the towers of Lincoln cathedral, and on 25 April 1959 the station was granted the Freedom of the City of Lincoln. Since then all Waddington aircraft have carried the City Crest.

By August 1961 three squadrons of Vulcans were based at Waddington, and the type remained there until March 1984, its planned retirement having been postponed because of the Falklands conflict.

The fiftieth anniversary of the RAF was celebrated at the base on 1 April 1968, mainly because the RAF's last flying Lancaster was based at the airfield from the mid-1960s until 1970, when moved temporarily to Hendon.

In November 1940 it was the first station to receive the Avro Manchester heavy bomber. 207 Squadron were assigned the task of introducing this ill fated aircraft in to service.

44 Sqn was the first in RAF Bomber Command to fly operationally with the Lancaster on 2 March 1942 from Waddington.

On 17 April 1942 at around 3pm, six Avro Lancasters from 44 Sqn left in daylight for the MAN diesel engine (for U-boats) factory at Augsburg in southern Germany (Bavaria). Four Lancasters were shot down and Squadron Leader John Dering Nettleton received a VC, piloting R5508. He survived due to the German fighters running out of fuel, and lack of daylight.

In 1943 and 1944 the station commander was Group Captain Charles Elworthy.