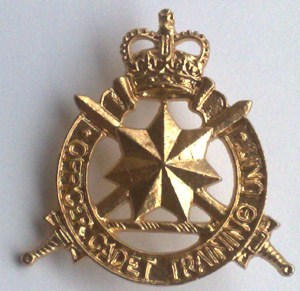 In April 1980 the Officer Cadet Training Unit from Henlow was merged with the Royal Air Force College, and since then, all officers of Royal Air Force and Princess Mary’s Royal Air Force Nursing Sisters have completed their initial officer training at Cranwell.

The main part of the training of the unit is of a technical character, and it is desirable that there should be a certain amount of parade drill. Although it is not fashionable to say so nowadays, smartness on parade has never done troops any harm.

I was a Cadet on No.12 Officers Initial Course "B" (2).Course Commander was Sqd.Ldr S.J.Carr D.F.C. Our N.C.O. was a fellow Scot. Flt.Sgt.J.Docherty. Is there any body out there who survived that course. Our only claim to glory was on the eve of our pass-out parade,we broke into the Regiment hanger, pinched their gleaming Howitzer and pushed it down the hill in the direction on Grantham.