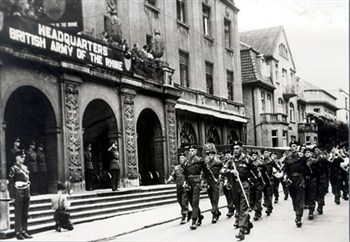 The British Army of the Rhine(BAOR) was formally established in May 1945, following the defeat of Germany. Its first commander was Field Marshal Montgomery, the victorious leader of the British 21st Army Group, who took the surrender of German forces in NW Europe at Luneburg Heath. Initially an occupation force, until the new Federal Republic of Germany was granted full independence, BAOR with allied forces soon faced a new threat from the East. The presence of some 60 Russian divisions in East Germany could not be ignored.

At the end of the war HQ 21 Army Group, which became HQ BAOR, was located in Bad Oeynhausen, south of Minden.
In 1952 work began on the British Forces Maintenance Area West of the Rhine part of the project included the construction of a joint (Army/RAF) headquarters for BAOR in Rheindalen. Colonel H Grattan (late RE) was appointed Chief Engineer (CE) of this project, the plan was to construct:

The complex was designed to accommodate over 7,000 British and Allied service personnel and a civilian population (mostly German) of about 2,500 for ancillary services: a township approaching a population of 10,000.

HQ BAOR moved from Bad Oeynhausen to its new HQ at Rheindahlen in October 1954.

Forming the first of many Rock Bands and playing in the NAAFI Club HQ BAOR, then in the RAF Club, all Army guys at first, then mainly RAF guys (The D'Oaces). All between 1961 and 1965.

Visiting Aldershot for netball and games.....
The many beer parties held when one got demobbed, or joined the battalion...

I remember being moved from 15 ABOD Antwerp and cutting the cake (as I was the youngest WRAC), with the CO, when we were leaving to move to HQ BAOR. Remember lots of lovely people from Guilford,Aldershot, Bicester then Belgium and Viersen in Germany. Enjoyed working in the civilian section of the shed as a technical clerk.(the only WRAC). It was an experience meeting all the different nationalities,American, Dutch, German,even two French guys in their contingent. Did like the NAAFI shop on the base. Remember everybody being demobbed before me and it never seemed quite the same afterwards. Tried to contact Jenny Cowie who came from Dufftown in Scotland. Not so small couldn’t find her. Should have tried 30 years ago. If anybody is in touch with Pauline Coulson or Jenny or remembers me ..I would appreciate any info.
sorry no photos yet

March 1955 posted to CB Staff Troop HQRA 11 Armoured Div. Herford. Met up with Doug Buller, Mo Berry, Harry Houghton? Dennis Briggs, Jock Barr, Jock Sweeney Tony ? he took photo’s, Bombardier Jim ? we swam in the watertank at the rear of the block, Guy named Nash? badly burned his legs sun bathing. Had a cook called Lindsey? he damaged his meat and two veg with a local frauline. BSM Hobbs, Sargeant Sullivan, 2 Lt M. Nash. CO Capt. Roachrook. Easiest guard mounts I ever did. camp still on Google Earth. QMS was a drunken pratt used to fire his pistol from his vehicle when we went on manouvers. The camp on the other side of the main road housed the RMPs. If my memory serves me a number of them were killed on a Javelin Exercise when their truck overturned. Unchained Melody, Cherry Pink, and Blueberry Hill were tops on Radio Luxemburg. One of the best 6 months of my life